Daggers
Toby is a main character from King's Knight -Wrath of the Dark Dragon-.

In his 4★ form, Toby is depicted as a young man with blond hair and yellow eyes. He wears a green pendant on his neck and wears an oversized, sleeveless red shirt. He adorns the shirt with a studded belt and wears black shorts. He wears golden sandals.

As depicted in his 5★ form, Toby still has his blond hair and yellow eyes. He wears a red bell-boy hat on his head. He has sprouted a single, golden wing from the left side of his back. He adorns his neck with a long, blue scarf while still wearing his green pendant. He wears a stylized and sleeveless red cloak adorned with gold lacing and a green jewel on his belt. He wears sheer stockings and black shin guards with gold ankle bracelets.

1★-4★: One of the heroes blessed by Khalam.
A thief of exceptional skill, Toby received Khalam's blessing while seeking to catch a glimpse of an abducted princess that, according to rumor, had "eyes more beautiful than gemstones." 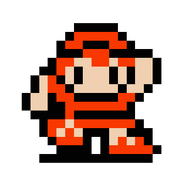 Retro render (4★).
Add a photo to this gallery
King's Knight -Wrath of the Dark Dragon-
Retrieved from "https://finalfantasy.fandom.com/wiki/Toby_(King%27s_Knight)?oldid=3287883"
Community content is available under CC-BY-SA unless otherwise noted.