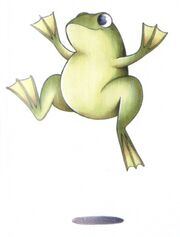 Toad (トード, Tōdo?), also known as Frog, is a recurring status effect in the Final Fantasy series. Characters afflicted with the ailment have their attack power reduced to its base amount and an affected cannot cast any spells other than Toad. The status can be cured by casting Toad on an afflicted character or by using the Maiden's Kiss item.

Any units turned into a Toad will have their Accuracy greatly reduced, making them miss more often, and are unable to cast magic. Enemies inflicted with Toad are instead instantly defeated, while characters afflicted with the status can still act, but are considered defeated. This status lasts after battle until cured with a Maiden's Kiss or the spell Esuna at level 4 or higher. The Toad spell does not cure the status.

Toad prevents the use of magic and drastically decreases a character's Attack and Defense causing all attacks to deal 1, or 0 damage. It can only be cured with a Maiden's Kiss, Esuna, or a Toad spell. It is necessary for the party to be in Toad status to advance past the first room in the Tower of Owen.

The Toad status disables the Summon, Darkness, Jump, Recall, Aim, Focus, Kick, Brace, Twincast, Bluff, Cry, Cover, Analyze, Throw, Steal, Ninjutsu, and Regen commands, along with all magic spells including monster spells other than the Toad spell. Additionally, attack is set to 1, Defense, Evasion, and Magic Evasion are all set to 0, and anyone attacking a target with Toad status has attack doubled. White Magic users can still cast Esuna, but only outside of battle.

The status can be cured by a Maiden's Kiss, Remedy, Esuna, or the Toad spell. While under Toad, Edward will only sing Toadsong. In the PSP version, the menu portrait for child Rydia, Palom, and Porom is a little bit different compared to the adult portraits featuring a small toad.

This section about a status effect in Final Fantasy IV -Interlude- is empty or needs to be expanded. You can help the Final Fantasy Wiki by expanding it.

Edward can inflict Toad on opponents by his Toadsong song, performed from his Bardsong command when he is himself a Toad.

The formula for how the Toad status works is as follows:

In addition to the spell found on the Transform Materia, an enemy skill called Frog Song causes the status along with Sleep. The Frog status prevents all commands except Attack, Item (including W-Item), and the Toad spell if the player has it equipped.

Frogs cannot use Limit Breaks. It also decreases character's attack power by 1/4th of their base damage and does not disappear when a character is knocked out. Linking Added Effect with either Transform or Hades makes the character immune to Frog. Frog does not last after battle, but if a character is in Frog status at the end of the battle, they will still perform a victory pose as a frog: they hop once, then backflip.

The Toad status can only be afflicted on the player characters by three enemies: sahagin and sahagin prince through Salientian Curse and Harpoon Hurl, and malboro through Bad Breath. The accessory called Enfeeblement Ring also puts the wearer in a permanent Toad status, only really useful for potential challenge runs.

Characters under the Toad status effect have their stats greatly decreased and cannot use Magic nor Limit Breaks, but can use items. The only ability toads can use is "Leapfrog". Basic attacks are replaced by tongue lashes and leaps, and the unique

ability is Bubble Breath, which sends slow-moving projectiles that cause minimal damage, but can make opponents flinch. Characters can block and dodge while in Toad status.

As a first in the series, each character has a unique model when afflicted by Toad, such as Cloud having a tiny Buster Sword on his back, Aerith having a small pink bow on her head, and Tifa being a black and white colored toad.

Though Frog doesn't appear as a status, the mixture of the Beautiful Potion, the Strange Potion, and the Unusual Potion transform Regent Cid from an oglop into a frog.

Poroggos have an ability named Frog Song that can turn a character into a frog. It also inflicts a Charm effect on the character. Notorious Monster Poroggos have a more powerful version called Frog Chorus that inflicts Charm on all players in range.

The game considers the Toad status to be the "costume" effect, the status symbol indicating that a character has somehow been changed to look like a monster or NPC.

Toad prevents the player from taking commands; additionally during Gilgamesh, they will get chased and take damage from Enkidu. Toad can be inflicted by Gilgamesh (first battle), Slithy Zolool Ja (Wanderer's Palace (Hard)), and Zuro Roggo (Antitower). Amon also inflicts a related status, Fire Toad; Fire Toad players can use no commands besides Fire Breath and are chased by snakes much like toads are chased by Enkidu.

As part of the 8-man hardcore raid content in the Stormblood expansion, Deltascape introduced Halicarnassus who is able to cast a frontal conal Ribbit spell which inflicts the status Toad when caught in its cone. In Savage content, this effect lasts longer. In both versions of the fight, the party member is transformed into a toad and can't cast spells, use abilities, or use items.

Status when transformed into a toad and actions are restricted.

The naga, nagarani, kadru, serpentess, and mahanaga enemies inflict Toad. While in the Toad state, party members can move, but cannot attack or defend, though the player character's menu is still accessible. The status can be cured with a Maiden's Kiss or otherwise it simply wears off over time. The status effect automatically clears when the battle ends.

Some meals impart a temporary immunity to Toad and it can be protected against with accessories.

Frog status limit the unit's action to Attack command only and no reaction ability will be activated. When a unit is under Frog status attacks, it deals damage equal to [PA * Br/100]. Attacking a Frog will receive 1.5 times Physical Attack bonus. But weapon attacks that normally have a vertical 3 tolerance when attacking from above will only have a vertical 2 tolerance if the target is a frog. Berserk status has no effect on frogs' attack damage.

KO does not remove this status automatically. The status will sustain forever until actively healed. Players can cure it using a Maiden's Kiss, Remedy or the magicks Esuna, Toad or Dispelna. If the human unit under this status has set the Black Magicks job command and learned the spell Toad, they can cast it to revert the Frog status even though it is in effect. Ribbon and accessory Japa Mala can protect the wearer from this ailment.

Frog is a status effect inflicted by the Alchemist spell Toad, the Animist skill Frog Song, and the enemy Lamia's Poison Frog attack.

The Toad status can be inflicted by Alchemists, Animists, and the Lamia family of monsters.

The Frog status effect turns the afflicted into a frog, and may be cured with the Maiden's Kiss.

The Toad status card will prevent treasure cards from appearing at the Duel Colosseum. Also, one of the in-game manuals' tutors is a blue toad, in the shape of one from Final Fantasy IV.

The Toad status card appears in the Labyrinth mode, and blocks the appearance of any Treasure Cards.

The Frog status appears and each character inflicted with the Frog ailment appears differently because the frog sprite uses the character's own palette to determine its color.

Cid was turned into a frog by the Frog Sage during the Ocean Puzzle sequence. The cure to this is apparently a maiden's kiss, which he obtained from Miles by kissing her when she made a sandwich out of him.

This section about a status effect in Chocobo no Fushigi na Dungeon is empty or needs to be expanded. You can help the Final Fantasy Wiki by expanding it.

This section about a status effect in Chocobo's Dungeon 2 is empty or needs to be expanded. You can help the Final Fantasy Wiki by expanding it.

There is a line in a 4-panel comic done by Yoshida Sensha back when Final Fantasy III for the Famicom was released, where frogged party members discuss it not being so bad being a frog, and that they should forgo saving the world and opt living as frogs instead. Someone at Square decided to quote this comic in the next two Final Fantasy games. In Final Fantasy IV the player can interact with frogs in Troia castle moat. All the frogs in the Japanese version make frog sounds except for one, which says "It's nice being a frog..." This was translated in various ways for English. In the original the frog says "What's up?" The PlayStation translation changes things further and just goes with, "..." The DS version says "This is life I tell you! I hope I never get turned back into a human." There is also a secret frog in Final Fantasy V that says the same thing in Japanese. In the Final Fantasy V PlayStation translation this was translated as "frogs are lucky". The GBA translation makes a Kermit the frog reference with "It's easy being green, dig?"

This gallery is incomplete and requires Toad render for Edward added. You can help the Final Fantasy Wiki by uploading images.
Statuses
Retrieved from "https://finalfantasy.fandom.com/wiki/Toad_(status)?oldid=3297529"
Community content is available under CC-BY-SA unless otherwise noted.