Cid Pollendina: Oh, shut up and help me remodel the Toad (ability) page!
Please expand this article into a full one. The following tasks need to be completed:This request can be discussed on the associated discussion page. Remove this notice upon completion.

Black magick that turns its target into a toad, or reverts a toad to its natural form.

Toad (トード, Tōdo?), also known as Frog, is a recurring spell which inflicts or reverts the Toad status effect.

Toad is a Black Magic spell, which transforms one or all enemies into toads. Monsters turned into toads are instantly defeated. The spell can also change allies from Toad (status) back into their original form. The success rate increases with the spell's level. Any character can learn Toad by having them use the Toad Tome (Toad Scroll in Final Fantasy Origins). In Origins, Dawn of Souls, and 20th Anniversary editions, the Minigame on the ice-sled can be rigged by mastering the Toad spell (getting it to level 16).

Toad is a Level 2 White Magic spell that can both inflict and remove the Toad status. It can be bought in Gysahl for 700 gil or can be obtained for free from the Gulgans in Gulgan Gulch. In order to access certain dungeons, the story requires players to be in Toad status. In the NES version, Toad is useful as an instant defeat spell: strictly speaking, monsters don't die from it, the toads just leave the battlefield, but characters still earn Gil and experience. The enemies Far Darrig and Sleipnir are capable of casting this spell on the party.

In the Easy Type version, the casting time was reduce to 2.

Toad is a Black Magic spell. It in initially known by imposter Rydia, Palom, and Rydia. It inflicts Toad to one or all enemies at the cost of 7 MP.

Toad is a Black Magic spell learned initially by Fusoya, Biggs, Rydia, and Palom (level 22). It costs 7 MP to cast.

Toad is a level 2 Black Magic spell that can be bought in Phantom Village for 300 gil, or found in Istory. It costs 8 MP to cast, and can be used by both Black Mages and Red Mages. It is one of the spells that can be cast from the Wonder Wand for free. Toad can be cast by Apanda, Byblos, Flaremancer, Garula as a boss, Omniscient, and Sorcerer.

Toad is the last spell on the Transform Materia, and costs 14 MP to cast. It has 72% success rate, unless when removing the status, when it always hits. The only enemy to utilize the spell is Jemnezmy, and only as a counterattack on an opponent that is a frog.

Toad is in the Black Magicks category. It inflicts or removes the Toad status. A character cannot do anything but use the Attack command and the Black Magick Toad spell (not counting Arithmeticks). It costs 12 MP, has a speed of 25, and costs 500 JP to learn.

Turns target into a frog.

Toad is a spell learned by the Alchemist. It turn the target into a toad. It costs 36 MP to cast, has a range of 3, and can only target one unit at a time. It can be stolen through the ability Steal, and is also susceptible to Return Magic. It cannot be Reflected. It can be learned from the Mandragora for 200 AP.

Toad is an Alchemist ability that turns a target into a toad. It can be learned from the Mandragora for 450 AP. It costs 32 MP to cast and has a range of 3.

Toad is an ability that can be chosen in the Onion Knight's Sage EX Burst, although it does nothing when selected.

Toad1 cast on all enemies in Final Fantasy II (GBA). 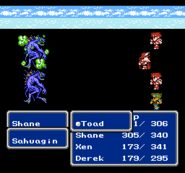 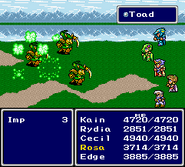