Relm: I couldn't miss the chance to practice my drawing!
This article is in need of a few pictures. Perhaps you can help by uploading a picture of Bravely Second jobs, his Washcloth outfit.

The sole survivor of Norende, Tiz Arrior is haunted by his failure to save his brother. He won't rest until he has restored his village.

Tiz Arrior is a playable character in Bravely Default and Bravely Second: End Layer. He is the sole survivor of the Great Chasm that destroys his hometown of Norende, during which he is unable to save his younger brother Til. He is deemed as the "Miracle Man" to have survived, especially after encountering Agnès Oblige soon after.

A young man, and sole survivor of the Great Chasm. After waking, he had a fateful encounter with the wind vestal, Agnès.

A nineteen-year-old boy from Norende. A simple and honest soul, he has a gentle and amiable demeanor that makes him well-liked. He acts as a mediator between friends, and often ends up with a lot on his plate (for which I am partly responsible).

Tiz has unruly silver-brown hair and brown eyes. He normally wears a white collared shirt with crests on the shoulders, brown leather gloves, a belt with potions and satchels attached to it, tight-fitting brown trousers and knee-high boots. When using the asterisks, Tiz's appearance changes according to which job he is using.

The Onion Shirt consists of a white and red shirt with a long white cape and white gloves. He wears brown pants with a brown belt and brown shoes. He wears a gold helm with red accents and four leaf-like protrusions on top. The Plain Tunic is simply his Freelancer outfit. The Dimensional Officer consists of a long white robe with two "tails" in the back. He wears black pants, boots and gloves.

In Bravely Second, alternate outfits return and can be bought at various locations. In his Sagittarius Garb, Tiz wears a black robe with red lining and a white sash belt. He wears a blue and white scarf over the robe. He wears black boots and white pants. His Washcloth outfit is simply a white towel wrapped around his waist and he is barefoot. The Freelancer Garb is simply his default outfit. His default outfit from Bravely Default returns under the name Shepard's Garb.

Tiz shares a few outfits with Ringabel from Bravely Default. The first is the Wakoku Warrior outfit, called Eastern War Garb, where he wears a long white scarf around his neck and a white cloth wrapped around his waist over brown shorts (a white loincloth in the Japanese version). He has brown gladiator sandals and brown bands wrapped around each wrist. The second is the Melodist's Shirt, called Minstrel's Garb, which consists of a long gold high-collared jacket with red accents. He wears a white dress shirt and a white cravat with a blue gem in the center. He wears tan pants and red boots.

This gallery is incomplete and requires Washcloth outfit added. You can help the Final Fantasy Wiki by uploading images.

Tiz is a simple and honest country 'bumpkin' with a gentle and amiable demeanor that makes him well-liked. He acts as a mediator between friends, often being the one responsible for keeping the party together. He is strong-willed and determined, relying on his common sense and personal morals to guide him. The death of his brother and the loss of his home plagues him, oftentimes making it difficult for him to sleep at night. His only desire is to rebuild Norende, hoping that doing so will return a feeling of normality to his life.

When Tiz and his younger brother Til are in the meadows of Norende caring for sheep, suddenly a blast of light erupted from the ground and consumed the village while forming a great chasm. When Tiz tries to save Til from falling into abyss, he is powerless to watch the boy slips into the chasm. Later found by Alternis Dim, a gravely wounded Tiz is transported to Caldisla where he slept for a week before waking up and learning his town's demise. Leaving for the recently formed Norende Ravine to see the chasm for itself and search for any survivors, revealing a hourglass from a mysterious figure, Tiz meets a young woman named Agnès Oblige who informs him that he is the only survivor. Learning that Agnès is the wind vestal and pursued by the Eternian forces, seeing her as the light of his hope, Tiz offers to join her in her quest in hopes the crystals' awakening could restore Norende.

When their quest takes them to Eisenberg, Tiz runs into a young boy named Egil who bears a strong likeness to his young brother and seeks to protect him at all costs. After helping him, Tiz suffers no more reoccurring nightmares of his brother Til's death. He and Agnès become closer during their travels, and he is chosen to be Agnès's closest companion when dealing with the information the sage has to tell them. In the next world, he uses the repeated opportunity to pass on the information Ringabel has remembered about Airy's true nature as a manipulator to Agnès. Though Tiz learns he unknowingly caused the Great Chasms in alternate worlds after his own, having the option to stop the fairy before she fulfilled her mission, he and the others decide to continue to face the true enemy when the time comes. Once at the last world connecting to the Celestial Realm, the group learn Airy is a servant of Ouroboros.

During the battle, Tiz discovers that he possesses a "Celestial Being" inside of himself that has been prolonging his life throughout his journey since Norende. Six months after Ouroboros's defeat, and on the same day that he, Agnès and Edea wanted to have a reunion, Tiz, who has been living in Caldisla with Egil, releases the Celestial and collapses soon after in front of Til's grave.

In the alternate ending Finale: Lying Airy, Tiz goes back to Caldisla and is hinted that he obtains the peaceful life he had wanted.

After the last big adventure, Tiz fell into a deep, unnatural sleep. His common sense and can-do attitude would really help on this quest...

As revealed, Tiz's comatose body was brought from Caldisla to Eternian Central Command and placed in the vivipod for safe-keeping until he can be awakened. However, Eternian Central Command falls under the control of Kaiser Oblivion, who arranged for Tiz to be well-guarded due to the threat the former hero could cause him if he comes to. Norzen Horoskoff, having intended to revive Tiz with a Soulstone, is forced to give the task to Edea and Yew Geneolgia, one of the Three Cavaliers tasked with protecting Agnès. As the two manage to sneak into the Command and install the Soulstone into the machine, their ally Magnolia Arch frees him after dispatching the military guards and Gigas Lich.

Magnolia carries Tiz to the others as he slowly comes to, having a tearful reunion with Edea and Agnès, the latter through her communication pendant. The women are overjoyed that he finally woke up after two years. Tiz joins the group, providing both his skills and his ability to convince enemies to not pick fights with them. After a challenging event in Sagitta where his body is taken over during a full moon, Tiz learns that he once again houses the soul of a Celestial Being; this time, a man by the name of Altair. Furthermore, Tiz learns that his and his friends' defeat of Ouroboros, despite saving Luxendarc at the time, ended up also aiding another cryst-fairy named Anne who serves the being Providence.

After Providence's defeat, Tiz collapses as Altair's soul had left his body to be together with Vega's soul, robbing him of his source of life. After saying his final farewells to both Agnès and the party, Tiz dies. However, the Adventurer, another Celestial Being who has watched Tiz's progress since the events of Bravely Default, acts to save Tiz's life; the Adventurer first notes that the SP Hourglass' abilities can fill Tiz with a "soul" made up of dreams, then when it proves drained, takes it back in time and gives it to Tiz when he was on his way to the destroyed Norende Village. Agnès ends up in possession of the Hourglass as it was given to her by Tiz as a memento in the altered flow of events.

Running to them from her current location in Caldisla, Agnès uses the Hourglass to revive Tiz. Following the final peace agreements with Eternia, Tiz and Agnès meet up in the graveyard where Tiz's brother is buried. Agnès obliquely reveals that she wishes to become Tiz's wife; Tiz agrees, resolving to settle down with her and live a quiet life in New Norende.

Depending on the currently assigned asterisk, Tiz's appearance, stats, and abilities change. However, his overall growth remains rather balanced among the group making him ideal at switching to any class need be. He has the best overall HP however, which makes him ideal for the HP reliant Dark Knight class, but his MP is the lowest of the group. This makes Tiz ideal for any back-up role like a healer, but he truly shines in classes like a Spell Fencer and a Monk due to his good balance of stats.

Tiz is voiced by Bryce Papenbrook in English. He shares his voice actor with Zidane Tribal in Dissidia Final Fantasy series and Machina Kunagiri in Final Fantasy Type-0.

Tiz is voiced by Mitsuki Saiga in the Japanese version.

In Bravely Default, Tiz's theme is "You Are My Hope" and played during his "Special Move" sequence. It also received an image song version sung by Mao of Sound Horizon as part of the Luxendarc's Big Diary album.

In Bravely Second, "Beneath the Hollow Moon" reprises itself as Tiz and Agnés’s theme and plays during events involving them. During his "Special Move" sequences, "I'll Finish Them Off!" plays.

"You Are My Hope" lyrics Edit

Tiz appears as an obtainable unit.

Tiz appears as an obtainable unit. 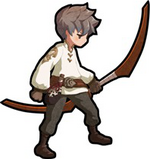 Tiz, along with Agnès, appears.[2] Tiz comes with Freelancer, Black Mage, and Thief jobs, each having an active and party ability.

Tiz would appear as a support character.

This section about a character in Million Arthur is empty or needs to be expanded. You can help the Final Fantasy Wiki by expanding it.

Tiz appears as an obtainable character.

Tiz makes an appearance as a collaboration character. His outfit is also available for players to wear.

Tiz appears as an obtainable character.

Tiz's last name "Arrior" stems from the word "warrior" without its first letter. Similarly, the Japanese spelling of 「オーリア」? omits the first symbol of "warrior" in katakana: 「ウォーリア」?.