As captain of the Kingsglaive, Drautos holds his soldiers to the same unforgiving high standards to which he holds himself and trained Nyx in the art of combat. His respect can only be earned with blood, sweat and tears.

Titus Drautos is the hidden main antagonist in Kingsglaive: Final Fantasy XV who also makes a brief appearance in Final Fantasy XV. He is captain of the Kingsglaive, an elite group of soldiers originally tasked as frontline battle infantry, now protecting King Regis. The Glaives are blessed with the monarch's magic. Titus is Nyx Ulric's mentor.

Titus Drautos is a middle-aged man with brown hair, blue eyes, and a scarred face. He wears a jacket made of red leather, black gloves, black pants, and black boots.

Drautos's theme color is red, the color of the empire, and the developers purposely put red in Drautos's gear.[2] It also contrasts with Nyx, whose color is blue.

For hearth and home.

Drautos is just as hard on himself as he is on others, especially to his subordinates, scolding Nyx for disobeying his orders despite knowing the fate that would have befallen Libertus Ostium had he not. His respect is difficult to earn and he tends to dwell on the past.

As Glauca he is callous and murderous, preferring to fight on the battlefield alongside his troops. Glauca has no major distinction between friend or foe, as he is willing to kill Deputy High Commander Ravus Nox Fleuret when he tries to wield the Ring of the Lucii.

Glauca lingers in the past, having lost his home to a Niflheim invasion decades ago. As a result, he does not care whom he fights for. He only works with the empire as it has promised him the liberation of his homeland. Although he once served Regis for the honor of his home, Glauca came to resent him for merely remaining in Insomnia, deeming him a traitor. Due to the similar circumstances that led to them joining the Kingsglaive, Drautos considers Nyx a kindred spirit, attempting to appeal to Nyx's emotion to get him to join him.

Drautos is a skilled swordsman and instructor, having trained Nyx. When adorned in the self-repairing suit of armor of Imperial General Glauca, Drautos's physical attributes are tremendously enhanced. Although it appears heavy, he can move at astonishing speeds, and due to his jet boots can land on places meters below him by slowing his descent and jump great distances. One of Glauca's primary strengths is his endurance.

Drautos was an able leader, trusted with leading the Kingsglaive and presumably commanding the soldiers of Niflheim. He was deceptive enough to conceal his true allegiance. He can drive, and has a black car. As the captain of the Kingsglaive, Titus should have received some of Regis's powers, although he is not shown using magic and relies purely on his physical prowess.

For the honor of my home, I fought and killed under a king I loathed. And still, he betrayed me. He betrayed us all.

Titus hails from from a small village in the northeastern archipelago of the Cavaugh Region. He lost his hometown in the war of 30 years ago,[1] but Regis took the orphaned Drautos in.[3] At some point, he began working for the empire as General Glauca, and under this pseudonym became the high commander of the imperial army. When Niflheim attacked Fenestala Manor in an attempt to kill King Regis and his young son, Prince Noctis, Glauca murdered Queen Sylva of Tenebrae. Regis and Noctis escaped, but the empire annexed Tenebrae and its prince and princess fell into imperial custody.

Twelve years later, on the outskirts of Lucis, Titus Drautos leads the Kingsglaive in a battle against the combined forces of Niflheim and Tenebrae. He orders his soldiers to retreat when a Diamond Weapon is deployed, a colossal magitek armor. Nyx ignores him to rescue a fellow Glaive, Libertus Ostium. After the enemy withdraws, either being ignorant or uncaring of Libertus being lost if his order were obeyed, Drautos berates Nyx and tells him to await reassignment.

After the Kingsglaive returns to the Crown City, Drautos orders Crowe Altius to infiltrate Tenebrae and rendezvous with Princess Lunafreya. He places Nyx on guard duty for a short time, and later makes him the princess's protector. When Crowe's murder is discovered, Drautos bequeaths her belongings to her friends Nyx and Libertus.

King Regis deliberates over whether to accept Niflheim's peace treaty. Regis wants to keep his son safe, and decides to send him away from the city before the signing ceremonies. As depicted in Final Fantasy XV Prologue Parting Ways, Ignis Scientia drives Noctis to meet the king the day before his departure in the Audi R8 Star of Lucis; they use Noctis's car because Captain Drautos wants to use it to ferry guests to the treaty-signing ceremony later. In the Citadel Captain Drautos is waiting to meet them, but to their surprise, Drautos tells Ignis and Noctis they can't see King Regis that day because he is too busy with the treaty-signing preparations. Drautos has Nyx drive Noctis back to his apartment in the city as thanks for letting them use his car.

As depicted in Final Fantasy XV, Drautos is with King Regis when the latter sends Noctis and his retinue on their way to Altissia for Noctis's wedding with Lunafreya. Noctis asks Drautos to take care of his father before departing.

Behold the king of Lucis, who hoarded tranquility within his precious walls. Where is your tranquility now, king? Here, is your peace, by steel's swift descent.

Glauca to King Regis before killing him.

Now working as Glauca, Titus abducts Lunafreya during a party celebrating the signing of the peace treaty. Nyx rescues her, and later finds Glauca fighting King Regis and Clarus Amicitia, the Shield of the King. Glauca kills Amicitia and cuts the Ring of the Lucii from King Regis's hand, a magical heirloom that has allowed the monarch to shield Insomnia from imperial invasion with a magical Wall. As the Wall falls, imperial forces storm the city. Glauca pursues Regis who flees with Nyx and Lunafreya. Glauca murders the king and continues after Nyx and the princess, the latter now carrying the Ring of the Lucii.

As Drautos, he contacts Nyx and orders him to go to Section D of the city. This turns out to be a trap, and through Libertus's intervention, it is revealed Drautos is Imperial General Glauca. He battles Nyx who has gained the power to command the statues of the Old Wall from the Ring of the Lucii. Libertus flees Insomnia with Lunafreya and the ring. Glauca is severely wounded when Nyx stabs him in the chest with his kukri. Though not directly shown as having died, Ravus replaces him as high commander of the imperial magitek army and Drautos is never heard of again.

When Noctis arrives in the ruins of Insomnia ten years later, he recovers Nyx's weapons from a powerful daemon—psychomancer. Whether this is what became of Drautos is unknown, but the last time Nyx had his kukri was when he plunged it into Glauca.

Glauca appears as an enemy boss.

Glauca is a character and summonable vision whose job is listed as General. Glauca's Trust Master reward is the Glauca's Greatsword.

Glauca appeared as part of the Final Fantasy collaboration. He was introduced in the event that happened in the North American version from November 28, 2016 to December 11, 2016.

He is obtainable as a 5-star ranked unit named "Glauca", with an balanced and devil type and dual dark elements.

As a 5-star ranked unit, Glauca wears his standard armor and emits a dark aura. His active skill is Abandon your prayers and his leader skill is Glaive of Regicide. 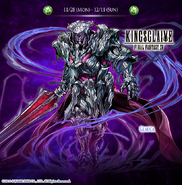 The likeness of Adrian Bouchet, a Zimbabwean actor, is used to portray Drautos. Bouchet also serves as the character's motion capture artist.

The redesigned version of the Magitek Exosuit attire for Final Fantasy XV looks like General Glauca's suit of armor. It likewise gives its wearer incredible endurance and durability.

In the Japanese version of Kingsglaive: Final Fantasy XV, Drautos is voiced by Kōichi Yamadera. He shares his Japanese voice actor with Kain Highwind from Dissidia 012 Final Fantasy.

A full-body, CG render of Drautos. 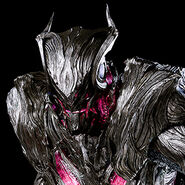 A full-body, CG render of Glauca. 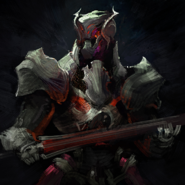 Concept art of Nyx versus Glauca.

Concept art of Nyx and Statue versus Glauca and Diamond Weapon.

Artwork of Nyx and Glauca fighting in Duscae. 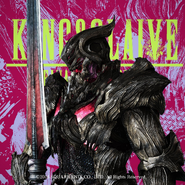 [view · edit · purge]Titus was the emperor of Rome from 79 to 81 AD. He was a renowned military commander and the first Roman emperor to succeed the throne from his biological father.

A man named Titus is also the addressee of an eponymous epistle found in the New Testament. Scholars believe that the Book of Titus was scribed by St. Paul. It provides guidance on the role of bishops in the burgeoning Church.