God of Earth. Legends tell of the Archaean absorbing the force of the cataclysmic Meteor as it hurtled down to Eos—and he still shoulders the stone in his deep sleep within the Disc. The Landforger was awakened from that slumber by the Oracle Lunafreya.

Titan, also known as the Archaean, is an Astral who appears in Final Fantasy XV. He is one of the Six and a giant who controls earth. Noctis Lucis Caelum forges a pact with Titan after defeating him at the Disc of Cauthess.

Like the other Astrals, Titan is based on a recurring summon in the Final Fantasy series. He is a giant with brown skin that has white patterns. When shouldering the Meteor of the Six he has a single, red eye, with rock formations protruding from his other eye socket and chest (likely elements of the Meteor). After Titan forges a covenant with Noctis, he no longer has them when summoned to aid the prince.

Titan is loyal to Noctis after he proves his worth, even willing to fight another Astral to protect him.

Aren't nursery rhymes curious things? Like this one: 'From the deep, the Archaean calls. Yet on deaf ears, the gods' tongue falls. The King made to kneel, in pain, he crawls.'

Titan is said to have caught the crystalline meteorite when it fell to Eos in ancient times, known in modern times as the Meteor of the Six. He sleeps while carrying it on his back at the Disc of Cauthess. Though millennia have passed, the meteorite still radiates tremendous heat. It is said the meteorite broke into pieces when it was caught by Titan,[1] and its shards are used by EXINERIS Industries to power the town of Lestallum.

Titan has been sleeping since the War of the Astrals, the last time he was known to be active. Tremors at times emanate from the Disc, which people call "Titan's snoring" as per the legend that he dwells under the Meteor.[2]

After the fall of Insomnia, Titan is awakened by Lunafreya Nox Fleuret, the Oracle. She asks him to lend his power to Noctis, and thus the Archaean calls out to the prince by sending him visions that induce strong headaches.

The chancellor of Niflheim, Ardyn Izunia, takes Noctis and his friends to the Disc of Cauthess where they battle Titan, who is assaulted and harpooned by Niflheim's magitek infantry. Titan does battle while upholding the meteorite, only using one arm to fight. Niflheim sends hordes of magitek troops to attack Titan while trying to restrain him. Noctis's friends freeze Titan's arm with elemancy and Noctis shatters it, defeating Titan. After Noctis proves his worth to Titan, the Archaean forges a pact with him and disappears. News spreads across Eos that both the Astral and the Meteor have vanished from the Disc. High Commander Fleuret broadcasts that Niflheim quelled the Archaean who had "awoken in a fit of rage", "averting disaster".

Having gained Titan's allegiance, he sometimes appears to help Noctis and the retinue during their quest to fulfill the prophecy of the True King. When summoned, Titan has both of his arms again and is no longer pierced by rock formations around his face and chest.

During Leviathan's Revelation in Altissia, Titan appears to raise an earthen wall to safeguard Noctis and Lunafreya as the two are severely exhausted from the Hydraen's trial. The wall breaks when a wave conjured by Leviathan crashes into it. Titan continues to protect Noctis by fending off the remaining imperial forces.

After Noctis disappears inside the Crystal, the world becomes enveloped in the long night. Mankind comes together to defend the remains of civilization in wait for Noctis's return as the True King. As shown in Final Fantasy XV: Comrades, the Astrals forgive the Kingsglaive for their betrayal of the crown after they prove they want to protect the world. Titan, alongside the other Astrals, appears to the Glaives chosen to protect Angelgard, the island where the True King is to awaken. He tests the worth of Glaives who stand trial before Bahamut in the name of defending Noctis.

After Noctis returns after his ten-year slumber inside the Crystal, he heads to Insomnia to fulfill the prophecy. Noctis's adversary, Ardyn Izunia, cloaks the Citadel building in a daemonic Wall, but Lunafreya's spirit ushers the Astrals in a joint attack to break through it. As Noctis sits upon the throne and calls down the Lucii the Astrals show up and turn into energy, entering the Ring of the Lucii alongside Noctis and the kings.

Noctis obtains Titan at the end of Chapter 4.

Proof that Noctis has received Titan’s blessing. The Archaean may come to his aid in a moment of true peril.

Item description of the Mark of the Archaean

Titan can be summoned in certain regions of Lucis, such as Leide, Duscae around the Disc of Cauthess, and the Rock of Ravatogh. Though not shown on the official guide[3], he can also emerge from the Vesperpool. He can't be summoned in dungeons or near the ocean.

Each Astral has its own requirements to be considered during the "summon roll", which happens every 10 seconds. While possible to summon during the first roll, it is rare. The player can summon once per battle and each summon can be called around once per in-game day (as long as summoning is possible in that battle; the summon prompt never appears in the locations for chapters 9–13 or boss battles in Chapter 14—bar scripted sequences). Titan has an increasingly better chance of appearing the more of Noctis's allies are in Danger or Down states. The player will have to be in a large enough open area to call him.

When summoned, Titan will either charge towards Noctis, promptly picking him up in one hand, before smashing the earth with his other hand, or he may pick up a large piece of earth, and hurl it towards Noctis's location. Both animations unearth multiple pillars from the ground around the battlefield. He has a unique animation in the battle against adamantoise, where he performs the former animation, but begins with several haymakers towards the tortoise.

Titan is fought at the end of Chapter 4. Noctis must survive by parrying Titan's attacks until Ignis, Gladiolus, and Prompto are able to cast Blizzard on him.

The naming of Astrals and related terminology was a deliberate move away from the "esoteric" terminology of earlier Final Fantasy games. To balance the fairly conventional naming, the Astrals were made to talk in an unusual manner. The term "Astral" was decided following the release of Episode Duscae, which cause confusion among fans due to the term "Archaean" being interpreted as a blanket name for the Astrals.[6] 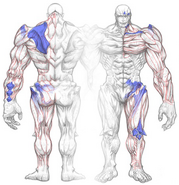 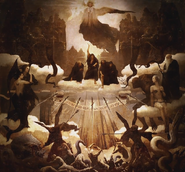 In "Genesis," Titan stands next to Shiva.

Titan in the War of the Astrals.

Promotional artwork of Noctis and his friends battling Niflheim troops at the Disc of Cauthess.

Concept artwork of Niflheim troops approaching the Disc of Cauthess.

Titan on the Royal Edition cover.

Titan attempts to crush Noctis with his foot in the Trial of Titan demo.

Noctis and Niflheim troops engage Titan in the Trial of Titan demo.

Titan forges a covenant with Noctis.

Titan faces off against Leviathan.

Archaean means of, or relating to, the geologic eon from about 3,800 to 2,500 million years ago marked by an atmosphere with little oxygen, the formation of the first continents and oceans, and the emergence of simple life.