The indomitable will of the earth made manifest, beloved of the kobold clans. Compassionate and gentle, Titan is as a father to his tunnel-dwelling worshippers. But woe betide those fool enough to provoke this colossus─for when his anger is waked, the very earth trembles and heaves under the unstoppable fury of his mountainous bulk.

Titan is the primal of the Kobold beast-tribes in Final Fantasy XIV, also known as the Lord of Crags (岩神, Ganshin?). He is encountered as a boss a number of times in A Realm Reborn.

Though Titan along with Leviathan were originally planned to appear in Version 1.0+, due to real-life circumstances they did not debut until the game was rebooted as A Realm Reborn.

Titan awakens shortly after the adventurer investigates the incidents at Haukke Manor. Meeting with Admiral Merlwyb Bloefhiswyn at Maelstrom headquarters, she admits to both the adventurer and Y'shtola that she broke the treaty with the Kobolds as part of the efforts to rebuild after the Calamity, which has prompted the summoning of the primal.

Seeking out of the Company of Heroes who slew the Lord of Crags when he was first summoned years ago, the veteran members set up a long list of minor tasks—culminating in a banquet for Master Gegeruju—to test the adventurer's resolve in defeating the primal. After learning all the crucial information needed, Y'shtola rigs an Aetheryte set up by Kobolds in Upper La Noscea to access The Navel where the god of the Kobolds await.

Upon entering the vast underground chamber, the Lord of Crags chastises the adventurer for ignoring the pleas of his children, before noticing that Ifrit has already been slain. Condemning the sons of man, Titan engages the adventurer before being banished back to aether. As they turn to leave, Y'shtola notices several Garlean officers spying on the fight.

Titan returns at the Howling Eye, where Garuda forces captured Kolbolds and Amalj'aa to summon him and Ifrit under torture so that Gaius van Baelsar can have the Ultima Weapon absorb the three primals one by one. Following the Ultima Weapon's destruction, the Kobolds summon Titan once more before the adventurer uses the Aetheryte set up in U'ghamoro Mines to banish the primal once again. As the adventurer discovers a mysterious ritual focus, the Kkobolds continue their attempts to summon Titan, as they are urged by the Ascians to conjure Titan with greater amounts of aether in their despair.

Titan is summoned again when the second Order Patriarch Za Da began to sacrifice his own people to summon their god, but the primal is summoned by the despair-filled emotions of a Koboldling named Ga Bu who could not save his parents from being slaughtered.[1] Titan acts on Ga Bu's feelings of rage and attacks human and Kobold alike before being defeated by the adventurer once more.

Titan is fought as a boss three times at the Navel: first midway through the main scenario, then in a Hard version in a sidequest, and finally an optional Extreme battle. While the latter two versions are fought at level 50 with a full party of eight, the initial storyline fight is at level 34 with only four players.

The Navel (Hard) is required to restore a Relic Weapon, and the later main scenario quests starting from "Before the Fall" require it—along with The Bowl of Embers (Hard) and The Howling Eye (Hard)—to have been previously completed.

Completing The Navel (Extreme) is optional, and grants the achievement "Earth to Earth."

Titan also appears as a mechanic in the fight against the Ultima Weapon, which uses him along with Ifrit and Garuda to perform combination attacks. In both fights, he is the second primal to be ejected from the Weapon.

Titan appears as one of the bosses in The Weapons Refrain (Ultimate), with mechanics even harder than extreme or Eden 4 Savage.

The Summoner job can summon Titan-Egi as melee combat pet. It is unlocked in the Level 35 job quest "Austerities of Earth," after defeating the Egi. It replaces Topaz Carbuncle. 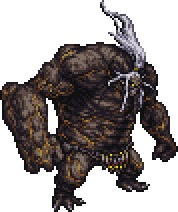 Titan appears as an Earth-elemental card.

Titan.
Add a photo to this gallery

Square Enix's Eorzea Cafe served a dish called "Big hamburger of Titan" whose description translates to: A burger reminiscent of the imposing Titan, packed to the brim with goodness. Eat it adventurer style by holding it firmly in place before taking a big bite. Place it under the weight!