Titan will mostly use physical attacks that can deal a great deal of damage to the party. He also has the ability to cast Quake to damage the whole party at once. The party's best chances of surviving are to have a party of Dragoons and a White Mage to heal. Once Titan is defeated, the party receives the last batch of Jobs: Summoner, Magus, Devout, Black Belt (3D version only), Sage (3D version only), and Ninja (3D version only). 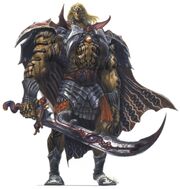 Despite the enemy being known as Phlegethon in the localization of Final Fantasy XIV, the enemy was known as Titan in the Japanese version. The enemy's name was changed by the localization team due to the Primal Titan already being included in the game. 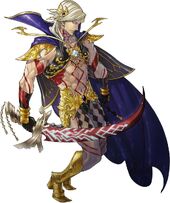 Despite being based on Titan and being named so in the Japanese versions of Final Fantasy Dimensions II, the English localization of the game uses the name of Phlegethon from Final Fantasy XIV.

Retrieved from "https://finalfantasy.fandom.com/wiki/Titan_(Final_Fantasy_III)?oldid=3219754"
Community content is available under CC-BY-SA unless otherwise noted.