Titan, a great giant who rends the very earth asunder. The great chasms he creates in the ground can swallow up armies of soldiers.

Titan (タイタン, Taitan?) is a recurring creature in the Final Fantasy series, most often appearing as a summoned monster. Its attack, Gaia's Wrath, sometimes called Anger of the Land or Earth Fury, deals Earth-elemental damage to all opponents, but is useless against airborne foes.

Titan can be summoned by Evokers, Summoners, and Sages. It is obtained by purchasing the Level 5 Summon Magic spell Hyper.

Rydia can summon Titan. She summons Titan initially against Cecil and Kain in Mist when she discovers they killed the Mist Dragon (2D and 3D). Titan shakes the earth and a landslide separates the Mist Valley from the Damcyan Desert.

On the Easy Type version, the casting time was reduced to 4.

Titan is a summon spell for the imposter Rydia as well as the real Rydia. Its signature attack, Gaia's Wrath, deals moderate non-elemental damage to all enemies at the cost of 40 MP.

Titan is wielded by the Tunneler, one of four Eidolon-holding bosses found within the Lower Section of the Tower of Babil B10. Once defeated, it leaves behind an orb of amber light. The imposter Rydia claims the light and regains the ability to summon Titan during battle. Titan, along with the other reclaimed Eidolons, are later summoned by the imposter Rydia on B6 of the tower to battle against the party.

For battle information, see Titan (The After Years boss)

Titan is a boss twice, the first time being unbeatable and the second time being obtainable as a summon. He is initially controlled by the Mysterious Girl, and will come to his senses after the final battle with him.

Titan also returns as a summon for Rydia. It performs Gaia's Wrath for 30 MP that deals moderate non-elemental damage on all enemies, but misses against flying opponents. Summons are gained during the final chapter, though all are usable during a portion of Porom's Tale.

Titan is a Level 3 summon for the Summoner job class. It attacks the party inside the Karnak Meteorite and becomes usable as a summon once defeated.

Titan takes 25 MP to summon to deal Earth damage against all ground opponents, but misses against aerial opponents. 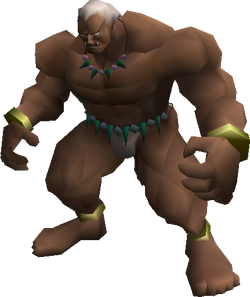 Titan's spell power is equal to 2.0625x the base magic damage.

Titan can be summoned in battle using the Titan Materia. He uses the attack Anger of The Land, an Earth-elemental attack that hits all opponents. His appearance is based on his original appearance in Final Fantasy VII.

Titan appears alongside the eidolon Fenrir in the default attack when summoned by Eiko. Terrestrial Rage deals earth-Elemental damage to all opponents for a cost of 30 MP. Although Titan's name is not mentioned in-game, it is revealed in the Japanese-exclusive Final Fantasy IX artbook and the PlayOnline version of Tetra Master. 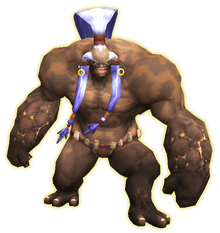 Titan is the Earth-element Avatar that can be summoned by Summoners. The quest to obtain Titan, Trial by Earth, starts in Bastok, the hume city notable for its mining industry.

Titan has the ability to give Stoneskin to all party members in range, protecting them from all damage for 15 minutes or until the maximum amount of damage has been absorbed. Titan also uses a variety of blunt attacks and earth-elemental magic. Many of Titan's abilities have added status effects.

It was originally a member of a tribe of giants (the Titans) who lived in the south of the Quon continent. The tribe was in conflict with the people of a neighboring city over the ownership and use of a forest. Despite their great physical strength, the Titans were overwhelmed until one day, a little girl called Daemdalus was looking for a runaway lamb and stumbled upon what looked like the corpse of a Titan. It was still alive, and, overcoming her fear, Daemdalus showed him compassion by tending to his wounds.

The Titan befriended the little girl, but the citizens discovered what was going on and captured the Titan and brought him back to the city. Daemdalus threw herself in front of him to stop him from being executed. The goddess Altana took pity and called both their souls to the heavens and transformed Titan into the Celestial Avatar of Earth. Daemdalus is the name of the brightest, yellow star of the Titan constellation.

Titan in also the name of one of the servers used within the game.

The ground trembles at his approach.

Titan is the rank 3 Earth Physical summon. His regular attack is Landslide, and his special attack, Gaia's Wrath, deals heavy Earth damage to all surrounding enemies. 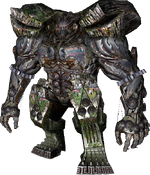 Titan is a fal'Cie who watches over Gran Pulse. It is colossal, easily dwarfing other fal'Cie, and being able to eat the giant adamantoises as if they were but morsels. Titan appears in a group of missions known as "Titan's Trials". Its mission is to guide the evolution of Gran Pulse fauna. By the events of Lightning Returns: Final Fantasy XIII, Titan has lost its power and crumbled, his remains scattered across the Dead Dunes. 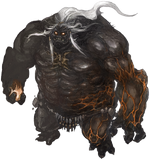 The indomitable will of the earth made manifest, beloved of the kobold clans.

Compassionate and gentle, Titan is as a father to his tunnel-dwelling worshipers. But woe betide those fool enough to provoke this colossus─for when his anger is waked, the very earth trembles and heaves under the unstoppable fury of his mountainous bulk.

Titan is one of the primals of Eorzea, worshiped by the Kobold beast tribe.

He is fought as a boss in The Navel, The Navel (Hard), and The Navel (Extreme) trials, as well as the third encounter of The Weapon's Refrain (Ultimate) raid. In battle, his signature attack is Earthen Fury, and will wipe the player party if his heart is not destroyed in time.

Titan was one of the classic summons spotted in earlier trailers, but due to real-world circumstances did not appear until A Realm Reborn, where he appears during the main scenario of 2.0 along with Ifrit and Garuda.

Another Titan appears as a boss in Final Fantasy XIV: Shadowbringers at the Eden Raid, manifested from the memories of the primal from the Warrior of Darkness to restore life on the rest of The First. The Savage mode of the raid adds a third version named Titan Maximum.

The Astral Titan is the summon who resides in the Disc of Cauthess. He is roused by the Oracle Lunafreya and sends out a psychic message to draw Prince Noctis to him. Noctis must pass his trial by combat to forge his covenant. When summoned, Titan uses his signature attack Gaia's Wrath to devastate the surrounding landscape. He is summoned when Noctis's allies are in danger, but can only appear in certain locations of the overworld.

The player can summon Astrals via crystals.

The most powerful in the Golem class and master of all its techniques, Titan can use its awesome strength to turn the tide of battle with a mere swing of its fist. However, this Eidolon can only be summoned for a short period of time and, as such, Central Command restricts Titan's usage to specific situations in spite of its overwhelming power.

Titan is a Golem-class Eidolon obtained by completing the Special Order objective "The Crystal wills you to take down Golem" during the Code Crimson mission Machina's Struggle (not possible during the first playthrough). He uses Megaton Punch, Ancients' Wrath and Gaia Stampede. His summoning radius is 2,1m and his summon duration is 90s.

An esper that levels the earth with a mighty blow.

Summoner can learn Titan as a summon for 220 JP. It deals Earth damage in a large area. It costs 30 MP to cast and has a speed of 20.

The Titan is an enemy and also a possible monster that the party's monster unit(s) can transform into. It can be found on the first floor of the Tower.

Titan is an Eidolon found in the Cave of Convulsion. Upon defeat, the party can access to Titan summon, which deals Earth damage to all enemies. 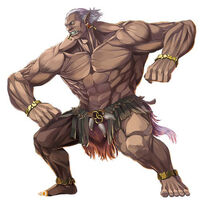 Titan is an Eidolon from the world of Eidola, serving as the guardian of the entrance way to the world in the Rift. He is known as the God of Earth in the world of mortals and the creator of the Earth Crystal in the Ancient Era.

Titan is a summon that for a short time triples the summoner's Bravery points whenever they take HP damage. The artwork used for the summon is from Final Fantasy V. Titan can be obtained in the third stage of the Distant Glory - Heroes storyline.

In Dissidia 012, Titan is a summon purchased from certain Moogle Shops for 80 KP.

This gallery is incomplete and requires XIIRW boss sprite added. You can help the Final Fantasy Wiki by uploading images.

Titan is one of two summoned monsters that is summoned by Krile through her Summoner's Dualcast ability. Titan has the same appearance from when he appeared in Final Fantasy V.

Titan appears as a character.

Titan appears as a character.

Titan appears as six cards and in the tale Titan and the Beanstalk. His cards are wood element.

Titan makes an appearance as a summon. The Soil Charge Triad (Soil is like the colored bullet of a Magun, used to summon creatures) needed to summon Titan is:

In the English audio version, the Soil Charge Triad is:

Followed by saying: "Smash! I summon you! Titan!"

Titan is one of three summons that deals massive damage to buildings. 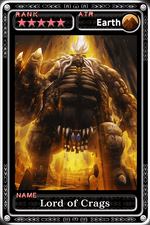 The kobolds of O'Ghomoro worship this fierce god of stone, whose Earthen Fury causes the very ground to tremor.

Summons
Retrieved from "https://finalfantasy.fandom.com/wiki/Titan?oldid=3244168"
Community content is available under CC-BY-SA unless otherwise noted.