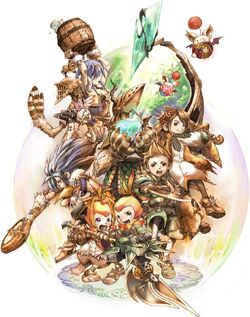 The Tipa (ティパ, Tipa?) caravan is the group of protagonists in Final Fantasy Crystal Chronicles. Like the other Crystal Caravanners, their quest is to collect Myrrh from Myrrh Trees to renew the power of the crystal in their village of Tipa. Along the way they discover more about the mysterious Miasma that plagues the land and of its origins.

The members in the Tipa caravan are determined by the player. They create a character and select from which of the four tribes they come from:

When creating a character, players choose their family profession. Each bestows its particular benefits for that character only, with the exception of the Merchant's expanded inventory and the Blacksmith and Tailor's expanded crafting capabilities. There are a total of eight homes in Tipa, each one for a different trade.

Even though the caravan can be made up of up to eight characters, only four will attend the "end of year" ceremony. It will always be the same four under most circumstances, seeming to prioritize the top row. If the caravan contains fewer than four characters, they will be joined by moogles.

Despite the Farmer family trade specializing in growing crops, all families can grow all seeds aside from wheat seeds. Certain family roles can grow each seed and be collected from that same role. Mothers will grow fruit seeds if given them, while older brothers will grow vegetable seeds. Mystery Seeds will be planted by either, but will be harvestable depending on what the player character's favorite food is.

The father will create different scrolls for weapons and accessories each year depending on their level. During each year, the player can speak to the father to obtain a recipe and his production ranking will go up, giving the player a new item. If the alchemist has a younger sister, she will offer the player to play with magicite. Since the player can't act in town, this essentially lets the player kick the magicite around like soccer balls, as they cannot be picked up or used otherwise.

Each of the following recipes will be received once per playthrough:

The father will craft different weapons and armor pieces that cannot be made anywhere else, depending on their level. During each year, for up to three times, the father's production ranking will increase, allowing him to craft more items. Items from the previous tier remain craftable at higher production levels.

The family can create Wheat when sent Wheat Seeds. Every mother in the town will produce bannock for the following year. After two years, the player will start receiving bundles of wheat.

The player will receive different amounts of fish each year depending on the character's relationship with their family.

The character can purchase items from their father. In the beginning, he will not have much to sell, but as he levels up his inventory will grow. Depending on their relationship with their family, they can purchase items at a cheaper price. During each year, for up to three times, the father's production ranking will increase, allowing him to sell more items. Items from the previous tier remain purchasable at higher production levels. By bettering the relationship with the father, he will offer better prices. This price difference does not apply to other Caravanners.

The player can create Wheat just like the Farmer family, as well as Bags of Flour. When sent wheat seeds, every mother in the town will produce bannock for the following year. After two years, the player starts receiving a bag of flour.

The character will receive different amounts of meat depending on their relationship with their family. Later three years, they will also receive milk from their mother.

The father can craft accessories. As they level up, they will be able to craft accessories that cannot be crafted anywhere else. Each year, for up to three times, the father's production ranking will increase, allowing him to craft more items. Items from the previous tier remain craftable at higher production levels.

When Crystal Chronicles appears in other games, a single male Clavat named Ciaran is used as a representative for the group.