Palmer, the Shinra's head of Space Explorations, tries to steal it for Rufus Shinra's use, but Cloud Strife and his party stop him, and must escape on the plane. Tiny Bronco is badly damaged when it is shot down by Shinra soldiers during their escape and loses all of its flight functions, but it remains a means of marine transportation, as it can navigate through shallow waters.

After crossing Gaea's Cliff and witnessing the events at the North Crater, the Tiny Bronco disappears along with the buggy, their roles being replaced by the Highwind.

In the early concept artwork of the plane, it is named "Sister Ray". Sister Ray was the name assigned to Shinra's Mako cannon.

On Square's old North American website squaresoft.com, a page about vehicles contained an image referring to the vehicle as "tiny broncho". The vehicle was referred to correctly in the page's text. 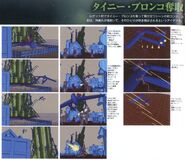 Storyboard of the take-off scene.

Cid on the Tiny Bronco.

Tiny Bronco flying through sky in an FMV.

Tiny Bronco in the sky.

Tiny Bronco hitting the sea in an FMV.

Tiny Bronco in the sea. 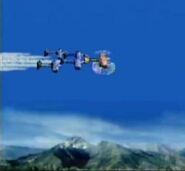 Tiny Bronco in Before Crisis.

Tiny Bronco in Before Crisis. 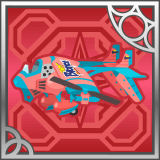 The Tiny Bronco is most likely named in reference to the real-life OV-10 Bronco, an American twin prop reconnaissance aircraft with a similar twin-boom design.