Time mage job command. Enables the use of magicks that manipulate time and space.

Time Magick (時魔法, Toki Mahō?), also known as Time Magic in the PlayStation version, is the Time Mage's action ability in Final Fantasy Tactics that contains non-elemental offensive and defensive magicks. In the PlayStation version Time Mage has a chance to of doing a chant when casting a spell, but in the War of the Lions remake these were removed.

After being learned in the Time Magick skillset, the spells can also be used by Arithmetician's Arithmeticks skills. 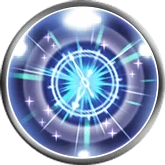 This gallery is incomplete and requires Slowja and Stop added. You can help the Final Fantasy Wiki by uploading images.