Masters of time and space, these mages easily bend all dimension to their will.

The Time Mage, also known as Dimension Mage, is a job in Final Fantasy V obtained after the Water Crystal shatters. Time Magic mainly focuses on buffing allies and debuffing enemies through time based spells. Time Mages have some attacking magic, though it has less offensive potential than a Black Mage as it has less Magic Power, does not get as much of a boost from rods as it does not naturally use elemental attacks, and can have a harder time dealing consistent damage due to the nature of the Time Magic attacks.

Mastering Time Mage for all four characters in the mobile and Steam versions earns the player the achievement "Master of Time and Space".

Time Mages wear orange robes, blue capes, big collars, and pointy hats. There is little variance between each of the characters, though Faris's cape and hat are teal instead of blue, and Galuf's and Krile's robes come down past their feet.

Time Magic specializes in buffing the party and debuffing enemies. Time Mages are hard-pressed for offensive spells as Comet and Meteor do random damage, and Gravity and Graviga depend on the enemies' HP and type.

Time Magic abilities give characters the Time Mage's base Magic based on the following formula:

The value of the base Magic granted in this way is capped at the Time Mage's base.

Thus the base Magic stat for a character with Time Magic equipped would be as follows:

Upon mastery, Freelancers and Mimes gain the Time Mage's base Agility and Magic unless they already have a higher base from another mastered job.

The job's innate command ability is Time Magic, and the job natively equips rods and staves. Leveling up in the job allows the character's other jobs to also use these abilities, the Time Magic skillset supporting increasingly powerful spells. 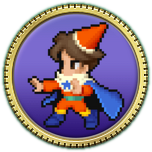