The Time Mage is a water-elemental Eidolon that appears in Final Fantasy Dimensions II. It can be obtained as a signet for Wrieg to equip by completing the "Orpiment Perpetuity" main quest of the Eureka arc.

In the original free-to-play versions of the game, the Time Mage's signet was a god-tier summon that could only be obtained through the game's summon draw shop. However, it taught the Quick Freeze ability instead of the Meteor ability. The Time Mage was an SSS rank summon and could be equipped by any party member. In addition, should the player obtain the Time Mage signet from the shop, they would obtain a costume voucher to obtain a Time Mage themed costume for either Aemo, Jornee, or Maina.

The Time Mage summon is based on the recurring job class in the series, being a mage that can use time magic to manipulate space-time. The artwork for the Time Mage is based on the design of the female Time Mage's design from Final Fantasy Tactics. As the summon evolves, the clocks behind the Time Mage begins to change and sprout clock cogs, with her staff also evolving to resemble a planetary model.

The Time Mage's special attack is Grasping Mist, which decreases the speed of all enemies for five turns and delays their next action. The Time Mage requires 2 bars from the Summon Gauge for Wrieg to summon.

The following are the abilities Wrieg can learn from the Time Mage: 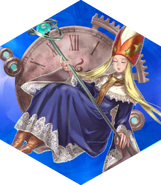 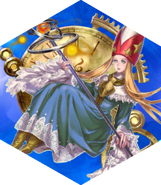 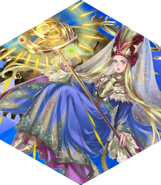