The Time Mage (時魔道士 or 時魔道師, Tokimadōshi?, lit. Time Sorcerer), also known as Dimensional Mage and abbreviated as TIM, is a job featured in various games in the Final Fantasy series. It is one of the staple mage classes in the series, though less common than Black Mage and White Mage.

Time Mages are classified by wearing traditional wizard's robes and pointy hats, usually with the shape of some type of heavenly body on it, such as a star or pentacle. Time Mages have low physical stats and high magic stats. They usually equip daggers, rods, hoods, and mage robes.

Their specialty magic is called Time Magic, and usually consists of spells that increase or decrease speed, such as Slow and Haste, and those that manipulate the forces of gravity, such as Gravity and Meteor.

After the Water Crystal's destruction, the Time Mage class is granted to the party.

Time Battlemage is a class in the Zodiac versions. They use Time Magick, as well as all Green Magick spells and have access to numerous augments. They use the ranged Crossbow as their main weapon, but are equipped with Heavy Armor. They can switch to several types of swords for a more physical focus.

Ashe is a Time Mage, with access to several Time spells. There are also moogles fought as enemies that have the Time Mage class.

The Time Mage is a supportive magical job class, and if left alone, can quickly bestow a number of beneficial status effects on their allies and debuffs on their foes, turning the tide of battle. It costs 8,320 JP to master this job. As of War of the Lions, this job costs 8,920 JP to master, as several spells saw increases in JP needed to learn them.

Time Mage (TIM) is a job accessible to nu mou and moogles. Time Mages' abilities cannot be predicted, but some classes, such as the Juggler and Ninja, can reap the benefits of Time Magic without the large MP consumption.

Time Mage is a job which make use of Time Magick. The spells cause various status effects on the target, such as Haste, Stop, and Quicken.

While not as powerful as Black Mages, Time Mages can wield wide-ranged spells which slow a target's movement. 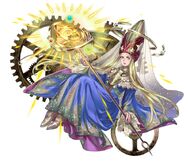 The Time Mage is a water-elemental Eidolon. It can be obtained as a signet for Wrieg to equip and teaches him the Meteor abilities.

In the Duel Colosseum, when chosen, the Time Mage job card increases card luck by 5.

The Time Mage job card appears in the Labyrinth mode, and increased card luck by one star.

The Time Mage appears as a character card.

These mages manipulate the flow of time to maintain their youthful good looks and exuberance.

The Time Mage is a character available to the party, she uses the Comet ability during battle. She unlocks at level 40.

Time Mage is a job unlocked in the 2★ Quest, "Aptitude Exam: Thief & Time Mage". It can be mastered by completing any 10 quests, then the 5★ quest "Mastery Trials: Time Mage".

Time Mage is a booster and damager with the ability to extend status buffs and reduce debuffs. They can initially equip rods and tomes; after mastery staves and bows can be equipped.

Though there is no official job system, Tidus's section of the Sphere Grid contains the Slow and Haste spells, as well as their upgrades, Slowga and Hastega. Other abilities in Tidus's Sphere Grid, like Delay Attack and Quick Hit, allow him to attack faster and to slow enemy attacks in a fashion similar to the spells.

The Time Mage appears as part of the Crystal Defenders collaboration.

The Time Mage appeared on a gold card.

Time Mage and Time Wizard were units and their ability was Time Shift. Time Mage could be promoted to Time Wizard.

The Time Mage appears as an asterisk in Bravely Default and Bravely Second. Eloch Quentis Khamer VIII is a Time Mage, and defeating him in battle gives the party the job. The Time Mage can do many things with their Time Magic. Their innate ability Time Slip allows the player to try again if they lose a battle.

Ringabel and Edea as Time Mages in Bravely Default.

Magnolia as a Time Mage in Bravely Second: End Layer. 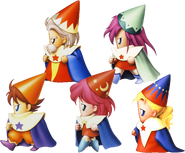 Bartz from Final Fantasy V as a Time Mage. 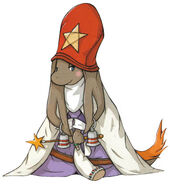 A nu mou as a Time Mage in Final Fantasy Tactics Advance. 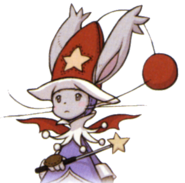 A moogle as a Time Mage in Final Fantasy XII: Revenant Wings.