Nothing says "carnivore" like a pair of these bestial knuckles.

Tiger Fangs (タイガーファング, Taigā Fangu?), also known as Tigerfang or Tiger Claws, are a recurring weapon in the series. They vary on power in each game they appear in, but are usually mid-level to high-level weapons. They usually boast no special effects, but are usually quite powerful in terms of Attack power. They sometimes boost other stats as well when equipped.

Tiger Claws are a high-rank weapon for Monks and Black Belts. They can be found in the Sunken Cave and have an Attack power of 82, as well as giving +5 Strength.

Claw that sometimes paralyzes the enemy.

The Tiger Fang is a claw for Yang that only appears in the Advance and The Complete Collection versions. They have an Attack power of 0, but an Accuracy of 40 and can sometimes inflict Paralyze upon hitting.

They also boost Stamina and Agility by +10 and are found inside the Lunar Ruins or dropped by King Behemoths. The weapon is bugged in the North American and original Japanese releases of the Advance version, for it does not ever inflict Paralyze on hit. The bug was fixed in the second Japanese release and the European port.

The Tiger Fangs are the strongest claws, providing 0 Attack, 50% Accuracy, and +10 Strength and Spirit, as well as dealing extra damage to Dragon-type enemies. They can only be dropped from King Behemoth in the Depths.

Tigerfang is a weapon exclusive to Sabin, and is his second strongest weapon, with Godhand being the strongest in the Advance remake. It has an attack power of 215, and also grants +3 Strength and Magic, and +2 Speed. It can be found in the Cave on the Veldt, and can be stolen from Great Behemoths.

The Tiger Fang is a weapon exclusive to Tifa, and is a low to mid-level weapon. It has four Materia slots in two linked spaces. It can be bought in Cosmo Canyon for 2,500 gil and has 2% chance of critical hit. Its Attack power is 38, with 110 Hit rate and Magic power of 8.

The Tiger Fangs is a high level weapon for Amarant. It teaches the abilities Revive and Counter, and can be bought for 13,500 gil in Daguerreo. It boasts an Attack power of 62.

Knuckles made to resemble the claws of a beast.

Tiger Fangs are a high-level weapon that teaches Earth Render to White Monks. It has an Attack power of 41, Evasion of 2, and is Lightning-elemental. It can be acquired either by reaching level 25 on Collection or as a random reward for completing a mission.

Tiger Fangs is a high-level weapon that teaches Earth Render to White Monks and Smash to Berserkers. It is Lightning-elemental, has an Attack of 41, and gives +4 Evasion. It can be bought for 2,000 gil in the shop after creating it in the Bazaar after using an Adamantite, Tanned Beast Hide, and Goldcap.

The Tigerfangs are a level 57 claw that increase Attack by 40, Bravery by 56, and Chase Sequence Brave damage by 30%. It can be obtained at the shop by trading 18,360 gil, Sonic Knuckles, a Destrier Barding, and Wormskin x2.

These imposing things would drive even the most alpha tiger insane with jealousy.

Tiger Fangs grants +3 to Attack. It can be equipped by Monk, Tifa, Red XIII, Snow, and Chocobo.

A claw weapon made from the fangs of a wicked beast. Boasting exceptional attack power, this weapon is particularly formidable against aquatic monsters. In legend it is known as the weapon of choice for a mighty general who supposedly never lost a battle at sea, but it vanished without a trace when this general finally met his end at the hands of vicious dark demons.

Tiger Fangs (FFBE) is a Fist obtained as the reward for clearing Scorn of the Beasts of the Dark. It provides 173 ATK and increases physical damage against aquatic enemies by 75%.

As sharp as a tiger's fangs. 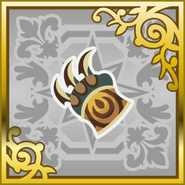 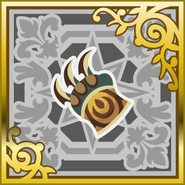 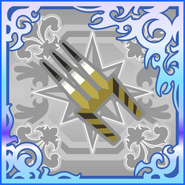 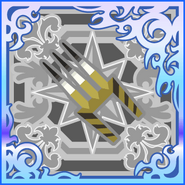 Mobius Final Fantasy.
Add a photo to this gallery

[view · edit · purge]Tiger Fangs is another name for the Bagh nakha, a claw-like weapon from India designed to fit over the knuckles or be concealed under and against the palm.

[view · edit · purge]The tiger (Panthera tigris) is the largest cat species, reaching a total body length of up to 3.38 m (11.1 ft) over curves and exceptionally weighing up to 388.7 kg (857 lb) in the wild. Its most recognisable feature is a pattern of dark vertical stripes on reddish-orange fur with a lighter underside.