Tifa appeared as a support character, and the first support character introduced. She could perform a Unison Limit Break with Cloud where she used her Final Heaven move with the Premium Heart equipped. She also provided a Level 1 power up which raised Cloud's attack power.

Tifa appearing as part of a Limit Break.

Tifa after the Limit Break is performed.

Final Heaven.
Add a photo to this gallery

Tifa is one of the characters added to Dissidia 012 Final Fantasy, fighting as a Warrior of Cosmos. She goes off her own during the twelfth cycle of war and comes into conflict with Ultimecia. Saved by Kain, she follows him to discover the truth of his betrayal, knowing he is a good man and would not attack his allies without reason. She does not know Sephiroth or Cloud due to losing her memories, but they remember her when the three confront one another in a Report.

Tifa dons her original design from Final Fantasy VII as her default outfit. Her alternate costumes, she wears her Final Fantasy VII: Advent Children attire and her Crisis Core -Final Fantasy VII- guide outfit. As a downloadable fourth outfit, Tifa wears an outfit with a red miniskirt, boots and gloves, based on her design by Yoshitaka Amano.

Tifa appears as a playable character classed as an Assassin type.

Tifa is a default character. Her specialty is the Beat Rush, a BRV attack effective against skeletons. She should be in the active party when following Cloud's story arc in Chapter 1, to complete its basic objectives.

A member of AVALANCHE, an anti-Shinra group that takes extreme measures to defy the company, and the popular proprietress of the bar 7th Heaven. She is a kind and motherly woman, while also being a proficient martial artist. Her lively personality belies an introverted nature and hides her love for her childhood friend Cloud.

Tifa is a purchasable character in the iOS version and does not appear in the original 3DS release. She must be purchased through the online store before she can be used.

Despite her cute face, this childhood friend of Cloud's is also a member of AVALANCHE, able to hold her own in any battle with no more than her fists. Yet even now she believes that her hero will come save her if she is ever in need of him.

It has been two years since the battle to save the Planet. Each day passes in peace as Tifa cares for the orphaned children of the war and manages 7th Heaven. Yet Cloud is nowhere to be seen, and his phone rings unanswered...

Tifa is a playable character, and is one of the few characters to have a 2nd variation. Her 1st variation is of her original attire in Final Fantasy VII, and is unlocked by collecting White Crystal Shards. Her 2nd variation is the main representative of Final Fantasy VII: Advent Children, and can be available from the start by transferring save data from the second demo into the retail game. However, if the player did not select her among their party of four, or download the demo, she can later be unlocked by collecting Green Crystal Shards.

Tifa #2.
Add a photo to this gallery

Tifa appears as a playable character.

Tifa's Advent Children sprite.
Add a photo to this gallery

Tifa is an ally and a summonable Legend depicted in her Final Fantasy VII and Final Fantasy VII: Advent Children outfits, an event-related sailor uniform, a swimsuit and a Santa Claus outfit. Her abilities are Beat Rush, Dolphin Blow, Meteor Strike, Somersault and Final Heaven. She was first introduced in the event, "Final Fantasy VII — Calamity from the Skies", in which her abilities and weapons were made usable to successfully combat Jenova∙LIFE and Jenova∙DEATH.

Seaside Tifa.
Add a photo to this gallery

Meteor Strike (CR+).
Add a photo to this gallery

Ultima (CR+).
Add a photo to this gallery

This AVALANCHE heroine really wishes people would stop getting into her drawers.

Tifa is an exclusive character only available from the Premium Character Shop as a random downloadable content. She uses Beat Rush and Somersault during battle.

Tifa is a recruitable character initially unlocked as the First-Time Reward in the Shinra Building 26F-30F dungeon, from the Of Shinra and Legends Challenge Event. She was also recruitable in The Battle Arena, Hidden Resolve, The Lone Wolf's Lament - Cloudy Wolf, and A Night to Remember.

Tifa is one of the many characters the player can transform into using the Trance system. Her appearance represents Final Fantasy VII alongside Cloud and Aerith.

Promotion
Add a photo to this gallery 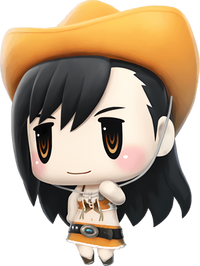 Notes: Aspiring martial artist / Seems cheerful and outgoing, but is actually quite shy / "Whoa! It finally worked!" / A cowgirl? Really?

She's There When You Need Her
Even though Tifa had never met Reynn and Lann, she still put herself in danger to rescue them. Call it heroic or call it reckless, Tifa just isn't the kind of woman to leave anyone stuck in a jam.

Tifa's Dream
Tifa makes ends meet as a guide in Babil, but hopes to one day save up enough to open her own restaurant. She'd be in seventh heaven if she ever made it happen.

A Childhood Friend
When Tifa ran into Cloud during the Cogna invasion, she was shocked to discover that he was the same Cloud she grew up with. But whether or not Cloud remembers her is anyone's guess.

The Mysterious Master
Tifa was badly hurt during a calamity that befell the village of Mist, which stood where Nibelheim does today. The man who would become her master just happened to be visiting the village and saved her life. Ever since, she's been his loyal student and disciple in the martial arts.

And clearly, he doesn't go easy on her. In fact, she now assumes that every horrible crisis she encounters must be some part of her master's training. Which makes you wonder what he's put her through...

Oh, and in case you're wondering... Sorry! Tifa's master will not be making an appearance this time.

The following is a list of quotes uttered by Tifa when talking to her.

What a relief to hear that Rydia's okay. Thank goodness.

Trading card of Tifa's Manikin, Imaginary Brawler.
Add a photo to this gallery

Tifa.
Add a photo to this gallery

Tifa is an initial playable character whose moveset includes Somersault, Beat Rush, and chargeable energy blasts. Her alternate costume is based on her Yoshitaka Amano artwork, and a third unlockable costume depicts her in her cowgirl outfit from the time she served as a guide in Nibelheim in Final Fantasy VII. Tifa is fought as an optional boss in the game's Arcade Mode in the Golden Saucer. To fight her, the player must defeat every opponent up to Sasuke in under 3 minutes and 20 seconds. Her title is "Summoner", and she can be fought after defeating "Guardian" Cloud.

Tifa's fighting style is Zangan-Ryu Martial Arts mixed with Ken's fighting style, known as Mishima-Style Fighting Karate. Some of her moves are based on Jin Kazama's former fighting style of Advanced Mishima-Style Fighting Karate and Kazama-Style Traditional Martial Arts in Tekken 3, as she utilizes his basic combo attacks and two of his special moves, Demon Scissors and Double Lift Kick, mixed with her Limit Break, Somersault. Few of her Limit Breaks are used as her basic attacks.

Her unique ability is using her Materia magic, as she casts Fire and Ice to deal double damage and to heal her magic points by sacrificing few of her hit points by casting Drain. During charge, she can cast two spells similar to a Red Mage's Dualcast. Her win animation is her victory pose from Final Fantasy VII.

Tifa's Seventh Heaven ability.
Add a photo to this gallery

Tifa appears in Kingdom Hearts II, looking around Hollow Bastion for Cloud and helping Leon defend Hollow Bastion when the world is invaded. Tifa wishes to help Cloud fight Sephiroth, and has spent much of the game searching for him. She interrupts a battle between the two and gives Cloud the power of light to combat Sephiroth's darkness.

Cloud shines brightly and he and Sephiroth depart to places unknown to continue their battle. Tifa thanks Sora for his help in locating Cloud and gives him the Fenrir Keychain. She later appears as a boss in several cups in the Underworld Coliseum, fighting with the other Final Fantasy characters.

Tifa is the physical embodiment of Cloud's inner light[1] to oppose Sephiroth, Cloud's darkness. She may be incorporeal and not an actual human. Nomura left her nature open to interpretation to generate discussion among players on whether or not Tifa was human.[2]

Tifa was originally supposed to appear in Kingdom Hearts, but was removed for time reasons.

In addition, Tifa makes an appearance in Kingdom Hearts χ [chi] as one of the obtainable character cards. She appears in the remake, Kingdom Hearts Union χ[Cross], on several medals. Players can have their female avatar dress like Tifa in her Kingdom Hearts II outfit.

Tifa in Dragon Quest & Final Fantasy in Itadaki Street Special.
Add a photo to this gallery

Tifa appeared as part of the Final Fantasy collaboration. She was introduced in the collaboration event that happened in the North American version from November 28, 2016 to December 11, 2016.

Tifa has appeared in the Final Fantasy Dissidia Event in Yo-kai Watch: Wibble Wobble as a Rank SSS Yo-kai of the Tough Tribe.