Star player of the Zanarkand Abes. His attacks lack some power due to his inexperience with the sword. Speed is his greatest asset.

Tidus is the main playable character in Final Fantasy X. He is of the classic Warrior class archetype, wielding swords and being strong and agile, but does not have such high Defense. A famed blitzball player, Tidus uses some of the maneuvers he has learned at the sport for his special attacks. Tidus uses abilities that let him manipulate the turn order in battle.

Tidus is the only party member whose name can be changed. As the main party member, Tidus always appears in field gameplay (only once replaced by Yuna). He also participates in the majority of minigames, and is a blitzball player.

Tidus's affection toward the party affects certain scenes, such as who will ride the machina sled with him to Macalania Temple.

Tidus equips swords and shields. He can be considered part Time Mage because he uses abilities like Haste, Slow and Delay Attack. He, alongside Wakka and Rikku, is able to fight underwater.

When counter-attacking a fiend on the ground, he performs a regular attack; when counter-attacking a fiend in the air, he lifts his sword high and swings to the right; when countering underwater, Tidus reverse-swings his sword as if attacking a flying fiend, and performs a regular attack when attacking a faster fiend e.g. Maelspike. Tidus has two victory poses, depending on whether he is on land or underwater. On land, Tidus throws his sword in the air, catches and swings it in front of him. Underwater, Tidus does a somersault and then crosses his arms.

Because of his speed, versatility and powerful Overdrives, Tidus is often chosen for a player's endgame party to tackle the optional content against Monster Arena creations and Dark Aeons.

Tidus lags behind Auron in terms of Strength and Defense, but makes up for it with high Agility, Evasion, and Accuracy growth, allowing him to dispatch the speedier fiends. 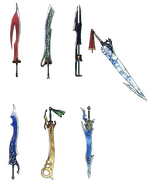 Tidus can equip swords and shields. His signature weapons are the Brotherhood sword he receives from Wakka, and his Celestial Weapon, the Caladbolg, that deals more damage the higher his HP is.

Tidus's Sphere Grid path runs near Yuna's and Auron's, and his representing color is aqua. The unique abilities in Tidus's default position on the Sphere Grid include the following:

Tidus's Overdrive is Swordplay, where he learns new skills by repeatedly using his old ones. When executed, a meter and a count-down timer appear with a small, gold-colored space in the middle of the meter, which the player must try to hit by pressing

when the marker is within its borders to do additional damage. The amount of additional damage depends on how much time is left on the timer. The width of the space decreases according to the strength of the Swordplay skill. The pointer will also move faster the stronger the Swordplay chosen, and the time allotted will be shorter. If the player misses the marker will return to its default position (far left of the meter) and start moving again. Tidus can also perform his Overdrives underwater, where his attacks van have different animation to accommodate.

Tidus can learn the Jecht Shot on the S.S. Winno. This significantly improves Tidus' strength at the sport.

Down this slope is an altar that, when examined with the Celestial Mirror, grants Tidus the Caladbolg. In the Japanese, German, and Italian versions, the Caladbolg is called Ultima Weapon, in the Spanish it is called Arma Artema (Artema being the name given to the Ultima spell and arma meaning weapon) and is simply called Ultima in the French version.

The Sun Crest is found at a place called The Beyond in Zanarkand Dome after defeating the area's boss. The player must head to the back of The Beyond and descend either the broken flight of stairs in the back or climb the stairs located near at entrance: they will be teleported to another corner of the room, and the chest containing the Sun Crest will now be at the top of the stairs they just descended. In the European, International, and Final Fantasy X HD Remaster versions, if the player does not obtain the Sun Crest immediately after fighting the area's boss, they must defeat Dark Bahamut to get it. The player can reenter the chamber to obtain it after speaking with Auron, but before leaving outside.

To obtain the Sun Sigil, the player must beat the chocobo trainer in the Calm Lands with a time 0:00. This is possible by collecting enough balloons to lower their time to 0:00 upon finishing. The player has to finish the course in under 36 Seconds with a minimum of 13 balloons and only one bird hit to get the required time. In some versions of the game, if the player times 0:00 on the first try, they must beat the time of 0:00 to receive the sigil. In the HD remaster version, scoring exactly 0:00.0 will not earn the sigil. Although it will display as 0:00.0, the "perfect time" is achieved with at least -0.1 seconds.

The Caladbolg deals more damage the closer Tidus is to his max HP, as is tradition with the Ultima Weapon.

The following table lists are the abilities the Caladbolg will have after the appropriate upgrade is used.

With his high SH and EN, Tidus is best in a forward position. His PA, initially low, increases to a decent figure by later levels. Tidus is the best offensive player due to Jecht Shot, but struggles defensively. He begins with Sphere Shot.