The Abes set was an in-game reward for the attenders of Final Fantasy XIV Fan Festival 2017 in Frankfurt. Attenders can choose between the High Summoner set or the Abes set.

Abes set.
Add a photo to this gallery

Tidus is a recruitable character. He is of the Visitor race and has Ace as his main job. His attack is Spiral Cut and his abilities are Slice & Dice and Energy Rain. 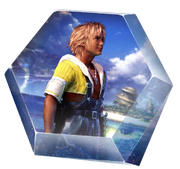 Tidus appeared in the original free-to-play version. He was a water-elemental summon and a character costume for players to obtain.

Tidus's special attack was Spring of Speed, which increased the speed of all party members for five turns and hastens their next turn. Summoning Tidus required two summon gauges. In addition, Tidus taught the Spiral Cut ability, which appeared as one of his Swordplay Overdrives and even shared the same animation. The Tidus signet was an SS+ rank summon and had a summon cost of 16 to equip to a character.

Tidus allowed the wielder to use the following abilities:

Similar to other series cameo characters, the Tidus summon and costume were removed from the premium release of Final Fantasy Dimensions II.

Costume banner.
Add a photo to this gallery 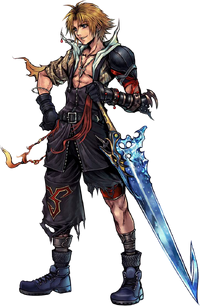 Tidus is a Warrior of Cosmos and stands as the hero representing Final Fantasy X, opposing Jecht.

Though seen as cheerful and energetic by his companions, Tidus's weak point is Jecht, a warrior of Chaos, to the point the very mention of his name angers him. Though he confuses his friends in doing so, Tidus claims to hate Jecht and feels no sympathy for him in spite of their relationship, but when Tidus is given the chance to battle his father he hesitates and questions his motivations. Jecht, likewise, defies orders from the Emperor about Tidus, and father and son meet to do battle on their own terms.

Tidus's alternate outfit is a slight remodel, removing most of the tears and frays from his uniform along with removing the high collar from his shirt and restoring the mesh-basket armguard, based on his Final Fantasy X appearance.

Tidus returns summoned for the first time to the war as a Warrior of Chaos. Bearing no memories of his home except for his hatred for Jecht, Tidus wishes to find and defeat him. Yuna tries to make him remember her and that he and his father resolved their differences, but the Emperor attacks her. Tidus intercepts the attack to protect Yuna, and while Yuna fights the Emperor, Jecht, a warrior of Cosmos in this cycle, saves Tidus's life by transferring his power to him, making Tidus into a Warrior of Cosmos and leaving Jecht an empty shell to eventually become a Warrior of Chaos.

Tidus's alternate outfit is redesigned to fully resemble his original Final Fantasy X appearance, while his third outfit leaves him shirtless as in Yoshitaka Amano's concept art of him.

Tidus is a playable character and a representative of Final Fantasy X. He is classed as a Speed-type character.

A blitzball player from the great city of Zanarkand. During a game, a monstrous creature suddenly appears and attacks the city. Amidst the chaos, Tidus is swept away to a world called Spira. In this world which he cannot understand, he meets the summoner Yuna and becomes her guardian, setting forth on a journey with her to find out the truth about Zanarkand.

Tidus appears as a default playable character, based on his Dissidia Final Fantasy appearance.

Being one of the faster characters, Tidus's abilities either his boost his already great agility, and for assisting in field stages. However, his offense is very limited and can't equip many abilities.

As son to a famous Blitzball player, Tidus was expected to do little more than play well until he was dragged from all that he knew to learn of the cruel lies binding Spira and the bitter truth of his father's disappearance...

Tidus is a default playable character. If the player did not select him among their party of four, he can later be unlocked by collecting Indigo Crystal Shards.

He is a Speed oriented character. His Limit, Blitz Ace, deals damage in proportion to his Strength and Agility.

Son of the legendary blitzball player Jecht and an ace player in his own right. A lively young man with a sensitive, even sentimental side.

Tidus is an ally and a summonable Legend depicted in his default Final Fantasy X outfit. His abilities are Energy Rain and Blitz Ace. His EX abilities are Blitz Ace, Slice & Dice, Energy Rain, Spiral Cut and Jecht Shot. He was first introduced as an event ally during the coinciding events, Final Fantasy Special Event Parts 1 & 2 — Shattered World and Final Fantasy Special Event Parts 1 & 2 — Showdown, in which he was unlocked by clearing the Zanarkand Ruins stage. Leveling him up to 99 in these events granted the player his individualized SSR weapon, Iron Grip. In battle, Tidus is armed with his Brotherhood.

FFX
Add a photo to this gallery

Slice & Dice (UUR+).
Add a photo to this gallery

Blitz Ace (CR).
Add a photo to this gallery

Teary reunions and hard-core blitzball run in the family of this Zanarkand Abes star.

Tidus is an exclusive character available from the Premium Character Shop as a random downloadable content, he uses the Energy Rain ability during battle. His Brotherhood and Caladbolg swords are available as monster drops in the Zanarkand Ruins premium map, granting +2 and +10 attack respectively to the Warrior, Red Mage, Blue Mage and Onion Knight classes and to Firion, Terra, Celes, Zidane, Ashe and Lightning.

Son of the legendary blitzball player Jecht, Tidus is a blitzball ace in his own right. While generally upbeat and gung-ho, he has a sentimental side as well.

Tidus appears as a playable character. He could be first obtained as a pre-registration reward in the first week of the game's release, then during the Challenge Event Operation Mi'ihen as a First Time Reward for completing Command Center - Operations Control on the Classic difficulty track of that event. He has also appeared in Defying Fate, Destiny's Path, This is Our Story and A Dream for Spira.

Tidus appears as a summonable vision and optional playable characters, obtainable since the event Macalania Woods. A 5-7★ Rare Summon, Tidus' job is listed as Guardian, and his roles are Physical Damage and Support. His Trust Master reward is the water-elemental sword Brotherhood, which has an Attack power of 135, and his Super Trust Master reward is the passive ability materia Praying Child's Dream.

Tidus appears as a character. 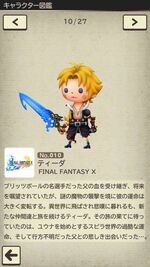 Tidus makes an appearance as an obtainable card. His outfit is also made available to the main character.

Tidus outfit.
Add a photo to this gallery

Tidus is a summonable champion.

Blitzball
Tidus lives in Besaid, and as you might have guessed, he's the best blitzball player around. Sadly, Besaid doesn't seem to have one of those impressive spherical stadiums.

Athletic Abilities Off the Chart
Tidus was born to swim and play sports, and he uses his boundless stamina and agility to deal with rogue Mirages and other troubles in the waters off Besaid.

He's also gotten pretty handy with a sword. The fact that he almost measures up to the League of S's more seasoned fighters like Squall, Cloud, and Lightning should tell you a lot about what he's physically capable of.

Tidus and Shantotto
Shantotto calls Tidus the "jock with the gills of a flounder," so it may seem as if she doesn't think much of him. On the contrary, they often work together to help the people of Besaid, and she values his talents quite highly. So don't let the unidirectional harsh wording fool you; they're actually good friends who share a healthy dose of mutual respect.

Just a Really Nice Guy
Nothing can stop Tidus once he sets his mind on something. If you ask him for help, this brave and good-natured youth will never let you down.

When Yuna was kidnapped, Tidus chased her kidnapper all the way up the Crystal Tower. Some might call that idiotic, especially since he'd barely had any battle training. But he was thinking with his heart, and that's nothing to sniff at.

Since the battle with Bismarck, Tidus and Yuna seem much closer. Perhaps their real journey is just about to begin.

PR-096 Tidus.
Add a photo to this gallery

Tidus appears as an opponent and on Triple Triad cards in the version available via the Final Fantasy Portal App. On Easy he uses All Open and Plus. On Normal he uses Same and Swap. On Hard he uses Plus and Chaos, and the rare five star cards of himself and Yuna can be won from him, among other cards. He uses the trading rule One.

Dissidia
Add a photo to this gallery

A younger version of Tidus appears in Kingdom Hearts, as childhood friends with Selphie Tilmitt of Final Fantasy VIII, Wakka and the three main protagonists of the series, Sora, Riku and Kairi. He is an energetic boy confident in his athletic ability who likes to spar using a wooden training sword known as a bokken where he employs a variation of his original battle stance. Once Sora, Riku and Kairi are swept off the island, Tidus, Selphie and Wakka are left behind.

Tidus's Kingdom Hearts design features a scar on his cheek that was not present in Final Fantasy X. Its origins remain unknown.

Tidus makes an appearance in Kingdom Hearts χ [chi] as one of the obtainable character cards. He appears in the remake, Kingdom Hearts Union χ[Cross], on several medals.

Kingdom Hearts Union χ[Cross]
Add a photo to this gallery

Along with Auron, Yuna, Rikku and Paine, Tidus appears as a playable character in Dragon Quest & Final Fantasy in Itadaki Street Special.

Tidus makes an appearance as a card.

Tidus SR.
Add a photo to this gallery

Tidus and his sword Brotherhood appeared as part of the Final Fantasy collaboration. The collaboration event happened in the North American version from 2 to 15 November, 2015.

Brotherhood.
Add a photo to this gallery

Tidus appears alongside Yuna as part of the 2018 Final Fantasy collaboration.

This section is empty or needs to be expanded. You can help the Final Fantasy Wiki by expanding it.
Final Fantasy X characters
Final Fantasy Explorers
World of Final Fantasy characters
Retrieved from "https://finalfantasy.fandom.com/wiki/Tidus/Other_appearances?oldid=3157373"
Community content is available under CC-BY-SA unless otherwise noted.