Tidus's default player name is Nameless Dreamer, and his manikin counterpart has been renamed Fleeting Dream.

Tidus's default costume is "Ace Striker", an updated version of his appearance in the original Final Fantasy X. Compared to previous Dissidia games, his skin tone is slightly tanned, more closely resembling his original Final Fantasy X appearance. The first alternate coloration of this costume reverses the colors of his pants and shirt and gives him black-yellow shoes, and a blue gauntlet, resembling the Besaid Aurochs attire. The second alternate coloration recolors his shorts blue, his shirt white, his gauntlet red and shoes yellow-gray, resembling the Zanarkand Abes attire. 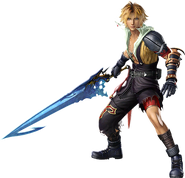 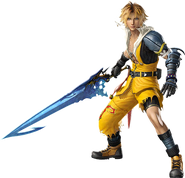 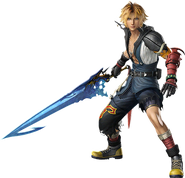 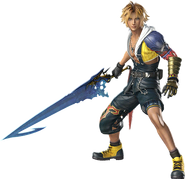 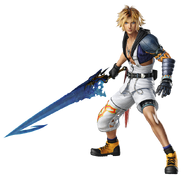 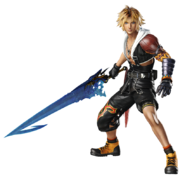 Zanarkand Abes Uniform C.
Add a photo to this gallery

Tidus wields swords as his main weapons. His weapons are based on their original designs from Final Fantasy X where they change form depending on what ability is attached to it. 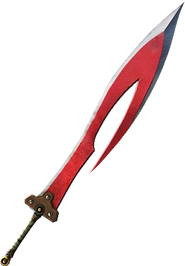 Tidus's Arc Sword.
Add a photo to this gallery

Tidus returns to World B, having been summoned by Materia to serve as one of her chosen champions. At first, Tidus had no qualms, but upon seeing his father when Spiritus makes contact, Tidus refuses to fight altogether and confides in Firion about this after leaving Materia's domain. The two are approached by Shantotto, who offers them a chance of escaping and the three team up.

While wandering through the Narshe gateway, Tidus and Firion are cautious about Shantotto, who overhears them and scolds them. They are joined by Exdeath, and Tidus and Shantotto engage in combat. Tidus is blindsided by Kefka, who drags him and Exdeath through another portal into Pandaemonium. Once there, Tidus and his group engage Exdeath, Kefka, and Ultimecia in battle until an exit gateway opens up. Tidus, Firion, and Shantotto dash towards it, only to be waylayed by the planesgorgers.

Tidus notices Firion being attacked by Kefka and rushes over to assist, but is engulfed by another portal that takes him to Besaid. Tidus reunites with Firion and encounters Jecht, and the three continue the battle against Exdeath, Kefka, and Ultimecia until the planesgorgers again descend upon them. After their adversaries escape, Jecht offers to stay behind and investigate while Tidus and Firion return to Materia.

Once the final clash begins, Tidus assists Vaan in his assault against Kefka, and in doing so narrowly avoid Kuja's sneak attack. Kefka proves elusive, until Tidus kick Vaan's Pyroclasm back at Kefka from behind. Shinryu descends on to the battlefield, having been lured our by the champions' staged battle, and Tidus and the others combine their strength toward besting the dragon god that is responsible for eroding the realm with the planesgorgers. After a grueling battle, Shinryu is defeated and the warriors are permitted to return home. Before departing, Tidus bestows his essence into a crystal for Materia to use in his place.

Type: Assassin - Tidus is highly mobile, as most of his Bravery attacks allow him to launch at the enemy. Most of these attacks can be canceled into dashes.
EX Skill: Quick Hit - Barrels forward, trapping Tidus's target in a whirlwind of blows. The last hit grants a buff that increases movement speed.

Tidus is classed as an Assassin character and he uses some moves with a "leap" mechanic that furthers the range of some of his attacks. He has fewer standard Bravery Attacks with the rest being allocated to his dash and as a result, he has more dashing Bravery attacks than any other character, allowing him some zany mobility to throw his opponents in for a loop as his "leap" mechanic from said attacks makes him play the same as a dodging-punish attacker. Reckless Tidus players will expend his dash gauge carelessly trying to spam his many dashing Bravery attacks; thus he requires careful management of the dash gauge to prevent tiring himself out from the rest of his moveset.

His HP attacks are Spiral Cut, Energy Rain, Slice & Dice and Jecht Shot (which can be further charged into Jecht Shot 2).

Tidus from the arcade tutorial. 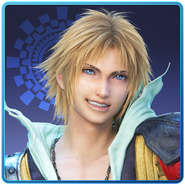 Tidus alongside the other 14 main characters.
Add a photo to this gallery