The Tiamat Eliminator is a boss that appears in Final Fantasy XIII.

This enemy fights similarly to the Ushumgal Subjugator. It changes form and can inflict imperil with its Tail Hammer ability. With its Ice Grenade ability, the Tiamat Eliminator can inflict Slow and remove the most recent buff applied to its target.

In its ground-based form, the Tiamat Eliminator is susceptible to Deprotect, Deshell, Slow, Daze, Poison and Imperil. It can also be launched after it is successfully Staggered.

When facing the Tiamat Eliminator, it is recommended that Lightning and her allies alternate between the Delta Attack and Combat Clinic paradigms. A combination of Ravagers and Saboteurs is useful for increasing the boss's chain gauge while simultaneously inflicting it with debuffs. 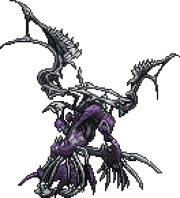 Retrieved from "https://finalfantasy.fandom.com/wiki/Tiamat_Eliminator?oldid=3293262"
Community content is available under CC-BY-SA unless otherwise noted.