Tiamat is a wyrm-type boss fought at the end of the Henne Mines in Final Fantasy XII. Vaan's party travels there in search of Fran's sister, Mjrn. When they find her, she has become mad due to a natural viera intolerance to high concentrations of Mist, in this case from exposure to manufacted nethicite and Venat, and had awakened Tiamat from its slumber.

It is also fought in the Zodiac versions' Trial Mode at Stage 13, where the Assassin's Dagger can be stolen from it.

The garif's bestiary entry tells about the Dragon's Game, where a God created a Dragon more powerful than any before it. The Dragon thought it was greater than the God, and so the God tricked the Dragon by making it perform feats of strength to prove itself greater than the God. The God used these tests to trick the Dragon into putting its neck through a magick ring too big for the rest of its body to fit through, and this ring restricted its power. As Tiamat is found sealed in the magicite mines near the garif territory, this story may refer to it.

Being a dragon awakened by Fran's sister, Mjrn, in a Mist-frenzy. Ancient tomes describe it as an anima of the winds, possessed of a violent temperament and destructive power enough to lead the entire world to ruin. There are some who believe that Tiamat was responsible of the decimation of the imperial troop performing experiments on manufacted nethicite, having been awakened by the Stones' fell cry.

The Original Japanese Guidebook cites Tiamat's MP as being 5,130, but subsequent guides list it as 999.

Larsa will be a guest. At critical health Tiamat's Defense heightens making regular attacks less effective. Tiamat's Disablega will Disable all characters in range, which can only be cured with an Esuna spell or Remedies. Tiamat's Breath ability also inflicts Sap on contact.

An average party level of 18 is recommended, and above level 25, Tiamat should not present too much of a difficulty. In the original version, Larsa will use infinite Hi-Potions to heal other party members. In the Zodiac versions the player can configure Larsa's gambits as they see fit and he uses items from the player's inventory.

When the party is spread out it is more difficult for Tiamat to use area attacks. Characters equipped with ranged weapons tend to spread out more than those who are not. Support buffs, like Shell, Protect, and Regen, are recommended. Regen can also be used to heal Sap. Quickenings should be used only when Tiamat's health becomes critical.

It is best not to use a gambit strategy that causes the characters to heal constantly. Tiamat deals heavy damage, and if the characters are constantly healing, they will not be attacking. One good strategy is to use the Decoy magick. In the original version where Larsa has infinite Hi-Potions, it may be useful to cast Decoy on him.

Montblanc will give 900 gil for defeating Tiamat.

Tiamat is an enemy and summon. 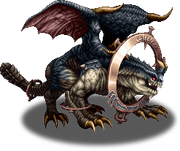