So? Which one of you will perish first?

Tiamat is a boss from Final Fantasy IX. It was created by Kuja from the crystal's memory of the Wind Guardian, seen when Vivi and Steiner visited the Wind Shrine. The Wind Guardian was defeated by the two off-screen.

Tiamat is the second of the guardians of Terra fought in Memoria, and appears in the room with a representation of the Invincible where the player can pick up the Rune Claws, a powerful weapon for Amarant. A crystal version of Tiamat can be fought in the Crystal World.

Tiamat is slightly stronger than Maliris. Its Twister attack deals Wind-elemental damage. It will drain MP and lower the party's magic and strength stats, so an extended fight puts the party at a disadvantage. Tiamat's Jet Fire attack will put everyone in Heat status. If a character with the Float status attacks Tiamat physically, it will be countered with Snort, which will remove the character from the battlefield. Tiamat is vulnerable to Sleep and Silence.

Defeating it in the mobile/Steam version yields the Gone with the Winds achievement.

Equipping items with protection from Aero is useful as well as Body Temp and MP Attack. Oddly enough, Tiamat's MP Absorb ability is Wind-elemental, and thus can also be protected against with proper equipment. Protection against the Heat status via Body Temp is ideal, but waiting for the status to lift will work.

Quina can cast Night every turn to put Tiamat to sleep and the other party members can attack (while equipped with the Insomniac ability). It is also possible to throw a Tent at Tiamat which has a 50% chance of inflicting Silence.

This crystalline dragon is weaker than its flesh-and-bone cousin. Perhaps the greatest boon to the party is the absence of the Float and Snort spells. This Tiamat is vulnerable to a myriad status ailments. The player should equip the Dragon Killer ability on Freya and cast Ice magic. Quina can learn Twister by eating the crystal Tiamat. 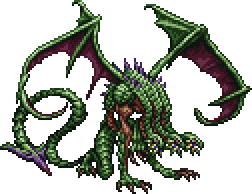 Retrieved from "https://finalfantasy.fandom.com/wiki/Tiamat_(Final_Fantasy_IX)?oldid=3238373"
Community content is available under CC-BY-SA unless otherwise noted.