Thunderbird is an enemy from Final Fantasy VII fought on the world map in Wutai Area. It is dangerous during the Wutai quest when the party's Materia is stolen, as it attacks in groups and uses Lightning to damage the whole party. The Wutai Area Bizarre Bugs yield X-Potions for healing, and the player may bring Aeris with a healing Limit Break. Once the party retrieves their Materia, the Thunderbird is a mere nuisance, and also susceptible to L4 Suicide. If Vincent is in the party, the player should set his Limit level to something other than 2 to not use his Lightning-elemental monster form.

Choose All Opponents
Use Lightning on Target

Choose All Opponents
Use Lightning on Target 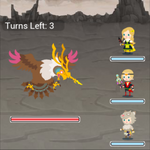 [view · edit · purge]The thunderbird is a legendary creature in certain North American indigenous peoples' history and culture. It is considered a "supernatural" bird of power and strength.