Once there were two small countries---one commanding the power of fire, the other the power of ice---that attacked each other in a contest for power. Ironically, the fire nation would eventually make a shield of ice, while the ice nation would make a shield of fire. Bent on victory, the two nations refrained from using the types of magic they had perfected, and began turning towards thunder magic instead. Unfortunately, although both nations began developing the thunder shield, it only served to pave the path to their own ruin.

Thunder Shield (雷神の盾 or サンダーシールド or らいじんのたて, Raijin no Tate or Sandā Shīrudo?), also known as Thunder Shld, Storm Shield and Yellow Shield, is a recurring shield in the series. It generally absorbs or resists the Lightning element for the user.

Shield containing the power of Thundaga.

Thunder Shield is a high-ranked shield that provides 43 Defense, 28 Magic Defense, 20% Evasion, 10% Magic Evasion, absorbs Lightning-elemental attacks, nullifies Wind-elemental attacks, and resists Fire-elemental and Ice-elemental attacks. When used as an item during battle it casts Thundaga and then breaks. When equipped it teaches Thundara at a x5 rate. It can be found in Zone Eater's Belly and Mt. Zozo, stolen from Muud Suud, won by betting the Genji Shield, Gauntlet, or Genji Glove in the Dragon's Neck Coliseum, and Metamorphed from Dante and Vector Chimera. It can be equipped by everyone except Umaro.

Yellow Shield is a piece of armor for Tidus, obtained when the dominant ability on any shield is either Lightningproof or Lightning Ward.

Shields can be equipped as weapons by Noctis and Gladiolus.

Storm Shield is a mid-ranked shield for the Clavat, providing 17 Defense and Resist Lightning +1.

Thunder Shield is a level 85 shield that provides +62 Defense. It can be obtained from the shop by trading 27,220 gil, Lustrous Shield, Sacred Beast Scale x4, and Bless Shard.

Thunder Shield is a level 60 shield that provides +61 Defense and Wall Rush HP Defense +10%. It can be obtained from the shop by trading 132,880 gil, Lustrous Shield, Taharka Husk, and Flash's Dream x5.

A lightweight shield from a faraway world. This piece of equipment has been blessed by the god of thunder, and thus is said to protect its wielder against lightning. In its home world it is a rare item that cannot be found for sale, so obtaining one of these is rumored to be quite difficult. 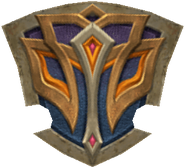 Armor
Retrieved from "https://finalfantasy.fandom.com/wiki/Thunder_Shield?oldid=3380828"
Community content is available under CC-BY-SA unless otherwise noted.