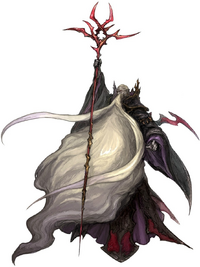 It was composed by Masayoshi Soken, with the lyrics written by Michael-Christopher Koji Fox and the vocals provided by Akane Ikeya.

It is the 23rd track in Before the Fall: Final Fantasy XIV Original Soundtrack.

A full transcript of the lyrics were posted on the Final Fantasy XIV Developer's Blog on July 11, 2014.

The first stanza is written in Old High Sylphic, with an adapted Eorzean translation to the right

Soul without a name, heed my call
Sin doth stain the hearts of us all
The worm hath burrowed deep and hath grown
Soon he too shall reap what is sown

Step into the storm, know its mercy
Let the wind and the rain crash down over thee
Lightning bright, thunder bold
Guiding us forevermore

Soul, thine end is nigh. Take mine hand
All life must return to the land
Lingered hath the worm, overlong
Purge thy flesh of fear and be strong

Step in from the storm, praise its mercy
Let the sting of the rain ne'er stray far from thee
Lightning bright, thunder bold
Freeing us forevermore