A lance endowed with the power of thunder that when swung releases lightning from its tip. Its enchanted blade was forged in the same manner as a mystical sword's, and it always glows in a white and bluish hue that makes it very aesthetically pleasing. A famous knight in the Kingdom of Pharm is known to wield this spear, and appears to boast of many young admirers. They can often be seen playing in the streets shouting "You shall be judged by my thunder!" holding twigs meant to mimic this spear in their hands.

Thunder Lance (サンダーランス, Sandā Ransu?), also known as Thunder Spear (サンダースピア, Sandā Supia?), and Thunder, is a recurring spear in the series. It is generally a mid-ranked Lightning-elemental spear that provides decent attack power, and usually shows up around the same time as the Flame Lance and Ice Lance.

A spear echoing with thunder.

Thunder Lance is a mid-ranked spear that provides 78 Attack, 67% Accuracy, 2% Evasion, and casts Thunder XVI when used as an item during battle. It can be found in Castle Palamecia or dropped from Death Rider or Lamia Matriarch.

Thunder Spear is the weakest spear, providing 45 Attack (35 in the NES version) and casts Thunder when used as an item during battle. It can be bought for 8,000 gil at Amur (3D versions only) or Northeast Saronia, or found in the Dragon Spire. It can only be equipped by the Onion Knight and Dragoon.

Thunder Spear is a weapon for Kimahri, obtained if the dominant ability on any spear is Lightningstrike.

Thunder has a spear icon before its name. The Thunder is the strongest spear with an attack power of 46. It can be bought for 11,250 GP at the weapon shop in the plain of Floatrocks. It deals Lightning-elemental damage upon attacking.

A spear infused with lightning magic that came from a faraway world. It was obtained from a treasure chest within Castle Palamecia. However, that chest also contained dreadful spirits of the dead, meaning one must have risked their very life to obtain this weapon.

Thunder Spear is a Spear obtained by crafting it using 5,000 gil, x12 Mythril Ore, x3 Iron Ores, x8 Lightning Crysts, and x5 Lightning Megacrysts, and by finding it at Lake Dorr and during the event The Empire of Light and Dark. It provides 48 ATK and is Lightning-elemental.

Thunder Spear (FFII) is a Spear obtained during the Final Fantasy II exploration event, Castle Palamecia. It provides 68 ATK, is Lightning-elemental, and enables use of the ability Thunderbolt.

Thunder Lance is a spear that can be equipped by Santiago. 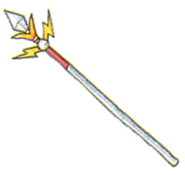 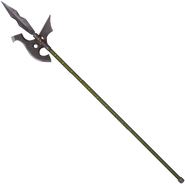 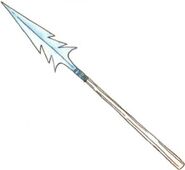 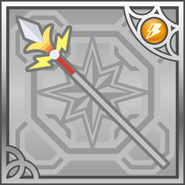 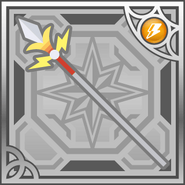 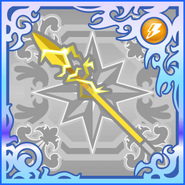 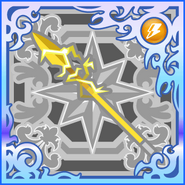