Gloves with a thunder god's power dwelling inside.

Thunder Gloves (雷神の, Raijin no Kote?, lit. Thunder God Gloves), also known as Yellow Armlet, is a recurring armor piece in the Final Fantasy series. It is a part of lightning equipment.

The Thunder Gloves is a mid-ranked gauntlet equipped by Steiner, Beatrix, and Freya, which provides 16 Evasion, 10 Magic Evasion, halves Thunder damage, and increases the damage of the user's Thunder attacks. It teaches the abilities Add Status and Devil Killer. It can be bought for 1,200 gil at Cleyra, Lindblum (disc 2 onwards), Dragon's Gate Merchant, Oeilvert, Desert Palace, Fossil Roo. Alexandria, and Treno (discs 3 & 4). A free pair is found in Cleyra in the area with the water wheel, near to where a sign hangs from the tree branch

Yellow Armlet is an armor for Kimahri, obtainable if the dominant ability on any armlet is either Lightning Ward or Lightningproof. 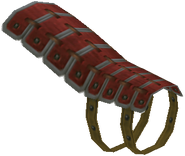