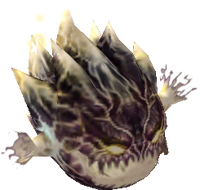 Thunder Bomb (サンダーボム, Sandā Bomu?) is an enemy family in Final Fantasy Type-0. It has four variants and three enemies.

A sphere of electromagnetic energy, the thunder bomb continuously absorbs both positive and negative ions until it reaches critical mass. The thunder bomb behaves quite similarly to its pyric and arctic cousins, meaning those with experience fighting either one should have little trouble vanquishing this shocking foe.

The Kingdom of Concordia exploits the raw electric energy that thunder bombs (called "galvanades") possess by using the monsters themselves as weapons. Moreover, an enormous variety of thunder bomb known as the "perkunas" has been discovered in the wild, but according to the latest reports, the kingdom has ostensibly not yet discovered a way to control these enormous electromagnetic orbs.