A sword whose lightning strikes are guided by a god of thunder and paralyze targets.

The Thunder Blade (サンダーブレード, Sandā Burēdo?), also known as Thunderblade, Thunder Hatchet, Tempestblade, and Bolt Sword, is a recurring weapon in the Final Fantasy series. It is a counterpart to the Flametongue and Icebrand swords that it is Lightning-elemental, but does not appear as often. A similar weapon, the Coral Sword, sometimes appears in games where the Thunderblade does not, fulfilling the same role as a Lightning-elemental sword.

Sword that may cast Thunder upon striking an enemy.

The Thunder Blade is a mid-powered sword for Locke, Terra, Celes, and Edgar. It has an attack power of 108, increases Magic by 2, randomly casts Thunder when the user attacks, and enables the Bushido and Runic commands. It can be bought in the World of Ruin for 7,000 gil, or found in the Magitek Research Facility. Its stats and availability are identical to the Flametongue and Icebrand.

Auron's Thunder Blade has the Lightningstrike as its dominant ability that can be customized to a weapon with four Electro Marbles.

Tempestblade is a low-ranked weapon for Vaan, providing in its base form 30 Attack, 15 Magick, and 60 Attack Speed. It is Lightning-elemental and can be bought from Tomaj's Sky Saloon shop (Chapter 3) for 850 gil, obtained as a reward from Mission 46: Bug Hunt or forged using the Artificer's Handbook.

Queen's Voltaic Saber is a lightning-elemental longsword with attack power of 52. It can be found as a random treasure in Bethnel Caverns.

The Thunder Hatchet is used by Clavat. It has an Attack power of 45, the same as the Flametongue and Icebrand, but gives a boost of 12 Defense that the other two weapons do not.

The Bolt Sword can be found in a chest inside ??? and can be bought in Urbeth for 700 gil. The sword has an attack of 5, and is Light-elemental that can inflict paralysis upon attacking. 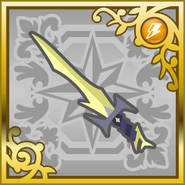 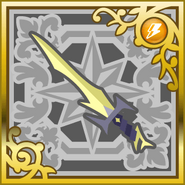 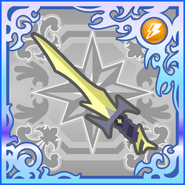 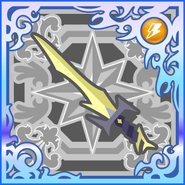