A similarly named ability also appears in Final Fantasy XII as an enemy ability. However, this ability is known as Thundger (サンガー, Sangā?) in Japanese, serving as an homage to the original Famicom release of Final Fantasy.

Thundaja is a powerful attack used by Dark Ixion in the International, PAL, and HD Remaster versions. It inflicts massive non-elemental damage, cannot be reflected, and inflicts strong Delay.

Thundaja is Elemental Magic exclusive to Black Mages. Scrolls of Thundaja can be obtained as rewards from some battles in Voidwatch.

Thundaja is a spell exclusive to the Esper Shemhazai. It causes heavy Thunder damage to all enemies in the area of the spell.

Thunder IV is a spell available to Black Mage at level 64, automatically replacing the player's Thunder II spell due to the Thunder Mastery III trait. It deals lightning damage with a potency of 50 to target and all enemies nearby it, with additional lightning damage over time.

Thundaja is a Black Magick spell that deals massive Thunder damage in an area with an effect of three horizontal and vertical reach of three. It can be learned by the Black Mage. It costs 850 JP to learn (900 in the The War of the Lions version), requires 48 MP to cast, and has a speed of 10. It will not damage its caster.

Thundaja has a 30% chance of being learned by a Black Mage who has not learned the spell yet and is damaged but not knocked out by the spell, or absorbed and heals at least 1 HP. Nullifying the damage does not count.

Thundaja deals massive lightning damage and zaps enemies. It can only be cast by piling four Thunder spells.

Thundaja is a Black Magic ability with a Rarity of 4☆. It deals massive lightning magic damage to one target, it can initially be used two times and it can be honed to Rank 5. It can be created by using Greater Black Orb x5, Greater Lightning Orb x8, and 10000 gil.

Thundaja is a tier four thunder spell. It can be unlocked by having 2 members in a stack with tier three thunder spells.

It is also used by Exnine Bahamut in his second battle and Enna Kros.

Thundaja appears in the Bravely series as the recurring magic, often appearing as the strongest Thunder-type magic in titles associated with the first Bravely Default. Unlike its predecessors, Thundaja is not associated with the Black Mage job, but is instead associated with the "demonic" optional jobs of each title, the Vampire and the Yōkai. Due to its demonic affinity, Thundaja can only be obtained through battling Asmodeus from Final Fantasy: The 4 Heroes of Light. 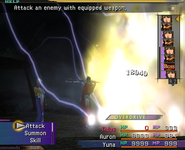