Physical damage to one enemy

Throw is Amarant's special ability in Final Fantasy IX. He can throw equipable weapons from the party's inventory, as well as specific throwing weapons: Pinwheels, Rising Suns, and Wing Edges. Throw deals physical damage to one enemy, based on the thrown item's Attack stat, as well as Amarant's Strength and Level. Throw can be a way to use weapons that the player is not equipping and which are not used for synthesis, as well as to do ranged damage and to attack flying enemies.

Bonus is reduced to 1 if Amarant is in Mini status, and is halved on a target with the Protect status. The Bonus will be 50% greater if the target is an aerial enemy, or if Amarant is equipped with the Power Throw ability. These effects also stack. If Amarant equips Healer, damage is converted to healing. Thrown weapons never do elemental damage even if the weapon itself is elemental.

Throw is best against aerial enemies, and the endgame superbosses and final bosses are in this category. Float does not make an enemy "aerial" type. When Amarant uses Throw, he can be in the back row without penalty. Though Power Throw improves it, Amarant cannot use Power Throw until the endgame, as it is only learned from the Bracer synthesized in Black Mage Village after the Genomes move in, and it takes whopping 19 Magic Stones to equip.

Though the regular equipable weapons can be thrown, this can be risky because they may be needed for synthesis later, and it may not be easy or even possible to re-acquire them. It is safer to throw the specific throw weapons; after Amarant joins, the player can buy Pinwheels from Madain Sari (and later from Alexandria and Lindblum), and after getting the Blue Narciss, the player can buy Rising Suns from the Mogshops in Desert Palace, Oeilvert, Ipsen's Castle, and Bran Bal, as well as from Daguerreo. The Wing Edge is the strongest throw weapon but is rare to acquire; they can be bought from Chocobo Hot and Cold, however.

If the player has accumulated a pool of gil with no use for it, they can spend it on weapons in weapon shops for Amarant to throw, such as Ultima Swords from Daguerreo. This can also help his Spare Change where a money hoard is, counterintuitively, a detriment.

Throw could be useful in Oeilvert, such as against the boss there. Amarant can use Throw while in Ipsen's Castle to do good damage without needing to equip a low attack value weapon, however, during the storyline visit there, he is out of the player's party, and there is never any need to return there.

Throw's downside is that it does not necessarily rival No Mercy or normal attacks with Killer abilities (Kaiser Knuckles' damage can also be improved with Elem-Atk gear), while having a consumable cost; No Mercy has an MP cost, but Amarant also has a "free" way to replenish MP: Chakra.

Render of thief swords when thrown

Render of swords when thrown

Render of rods when thrown 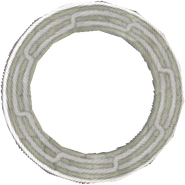 Render of rings when thrown

Render of rackets when thrown

Render of lances when thrown

Render of forks when thrown

Render of daggers when thrown 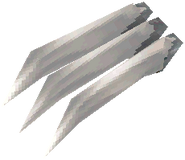