Through the Maelstrom (song) 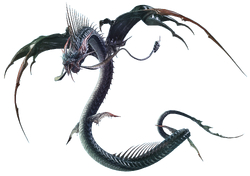 "Through the Maelstrom" (混沌の渦動 〜蛮神リヴァイアサン討滅戦〜, Konton no Kadō ~Banshin Rivaiasan Tōmetsusen~?, lit. Chaotic Maelstrom ~Savage God Leviathan Showdown~) is a boss theme from Final Fantasy XIV, introduced in Patch 2.2 for the battle against the primal Leviathan. It was composed by Masayoshi Soken, who also sung the lyrics.[1] The lyrics were written by Michael-Christopher Koji Fox and the chorus was provided by the Tidus Seven.

This song plays in the second half of the Whorleater (Hard) and the Whorleater (Extreme), once Leviathan uses his Tidal Wave attack. The lyrics seem to be from the point of view of the Sahagin tribe, who revere and called forth Leviathan.

It is the 2nd track in Before the Fall: Final Fantasy XIV Original Soundtrack.

A female chorus version titled "Through the Maelstrom (Female Vocals)" was left unused, featuring vocals by both Srisombut Preechaya and Soken.

"Through the Maelstrom (Female Vocals)" was included as the 14th track in Before the Fall: Final Fantasy XIV Original Soundtrack.

A remix of this song, "Blinding Indigo", plays in Eden's Gate: Inundation, when the party fights a malformed Leviathan.

A full transcript of the lyrics were posted on the Final Fantasy XIV Developer's Blog on May 14, 2014:[2]

Drifting in the realm beyond all knowing
Forsaken, shedding tears of glass
Now tumbling from the boundless heavens, taken
White moondrops, burning indigo

Silence from the knife that softly severs
Mistaken for an unsung prayer
Now rising from the soundless Deep. Awaken
White fury, blinding indigo

This section about an album is empty or needs to be expanded. You can help the Final Fantasy Wiki by expanding it.
Final Fantasy XIV Music
Musical themes
Community content is available under CC-BY-SA unless otherwise noted.