Necklace with three star-shaped bangles on its chain. Reduces the MP cost of all magic to 1.

The Three Stars (スリースターズ, Surī Sutāzu?), also known as the Celestriad or Economizer, is a recurring item used to reduce the MP cost of magic and skills.

Celestriad (Economizer on SNES and PlayStation) is a relic that causes all magic spells, lores, and summons to cost 1 MP.

An easy way of obtaining multiple Celestriads is to equip Gogo with three Steal abilities, give him/her the Aegis Shield, the Brigand's Glove and Safety Bit relics. Betting a Murakumo in the Dragon's Neck Coliseum will put the player in a fight against Galypdes, an otherwise rare enemy in the Phoenix Cave. Gogo will repeatedly mug the Galypdes, stealing either a Phoenix Down, or, if the player is lucky, a Celestriad. Upon winning the fight, the player wins a Holy Lance, which the player can bet to fight a Death Machine to obtain a new Murakumo, starting the cycle over.

Another way of obtaining a Celestriad is an item drop from Brachiosaur. The Celestriad can also be won by betting the Soul of Thamasa and defeating the Behemoth King.

Betting the Celestriad will reward the player with a Dragon Horn after defeating a Vector Chimera.

A beautiful accessory inspired by the glimmering stars in the night sky. Equipping this greatly increases the wearer's MP, and also reduces the amount of MP used when using abilities and magic. In a certain faraway land, this item is compared to another masterpiece called the "Soul of Thamasa," and mages search far and wide to get their hands on either of them, though only a very few have ever succeeded in doing so.

This section about an item in Mobius Final Fantasy is empty or needs to be expanded. You can help the Final Fantasy Wiki by expanding it. 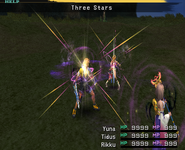 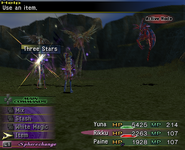 Celestriad is a portmanteau of "celestial" and "triad". [view · edit · purge]A triad is defined as a "group of three". The number three occurs with great frequency in mythologies and religions found across the globe.