Dark faeries trapped a raging storm within this hammer as they forged it.

Thor's Hammer (トールハンマー, Tōruhanmā?), also known as Mjollnir (ミョルニル, Myoruniru?), Mjöllnir, Thor Hammer, and Thor, is a recurring weapon in the series. It is oftentimes one of the most powerful hammers, and is usually associated with the Lightning element. It is often found near the end of the game and has high Attack power.

Hammer that casts Thundara when used.

Thor's Hammer is the second strongest hammer, only bested by the War Hammer. It has an Attack of 18 and Accuracy of 15, and casts Thundara when used as an item. It can be used by the Knight, Ninja, and White Wizard Job classes. It is found on the second floor of the Mirage Tower.

Thor is a weapon exclusive to the NES version that provides 30 Attack and can be found in Amur Sewers, Lake Dohr, Falgabard, and Saronia Catacombs.

Hammer that holds the power of lightning.

Thor's Hammer is the second strongest hammer, and only appears in the Advance and The Complete Collection remakes. It provides 190 Attack, 15 Strength, and 30 Accuracy, and deals Lightning-elemental damage.

It inflicts critical damage to Machine-type enemies, and casts Blitz when used as an item. This weapon is metallic. It can be acquired from the Cave of Trials after defeating the Death Machine that guards it.

Thor's Hammer is the most powerful hammer, and can be used by Cid, Golbez, Luca, and Gekkou. It is found in the Depths. It is a 2-handed weapon that adds Strength +10 to the wielder. It provides 140 Attack and 30 Accuracy.

Hammer named for a god. Full power from back row. Can be used two-handed.

The Thor's Hammer is a high-ranked hammer and is found in a hidden chest in the Dimension Castle section of the Interdimensional Rift. It can also be stolen from Death Claw. It has 78 Attack, 81 Hit Rate, and is long-ranged. It can be used by Freelancers, Berserkers, and Gladiators.

The Mjollnir is the White Mage's Relic Weapon, available only to level 75 White Mages after having completed an immensely lengthy and expensive quest (often taking months of time, hundreds of millions of gil, and the full assistance of an entire Linkshell community to obtain difficult Dynamis drop items).

The inception of the Mjollnir by the developers around the launch of the Zilart expansion was essentially to validate the White Mage job class as a front-line fighter. Though with optimal gear and clever strategy a White Mage with this weapon is formidable, it is still, however, outclassed by most other jobs designed specifically for combat with mediocre gear builds, and is therefore viewed as a trophy item for those who obtain it. It is also criticized for not amplifying any magical aspects of the White Mage job (as many other Relic Weapons build on their respective jobs' greater aspects) but instead attempts to make up for the job's poor offensive combative skills.

Mjollnir is the most powerful one-handed weapon (based solely on the damage statistic) in the entirety of Final Fantasy XI, including swords, axes, katana, and daggers.

Mjollnir is the name of Nero tol Scaeva's self created gunhammer.

Mjolnir is the strongest hammer, providing 55 Attack, 10 Magick, and 15 Resistance, as well as being Lightning-elemental. It can be bought for 12,000 gil in the shop after creating it in the Bazaar after using a Scarletite, Quince, and Unpurified Ether.

Mjolnir is a blunt great mace that provides 2 RISK, 27 Strength, -4 Agility, and 4 Range.

Thor's Hammer is Cinque's ultimate weapon. It provides 74 Attack Power and is dropped by True Gilgamesh when defeated by Cinque on the third playthrough. It can also be obtained in the PSP version by exchanging for 15 tickets on the Square Enix Members site. It sells for 1 gil. While the weapon does not change the model of Cinque's weapon, its appearance is a large scepter like mace, with the main material of the head black metal adorned with studded gold plating, and horizontally protruding triangular spikes coming from the core.

Mjollnir is a Strength-raising artifact that grants Strength +3.

Mjollnir has an attack of 13 and can only be bought from the multiplayer shop in Guera for 3,300 pts.

Mjollnir is classified as a pole, granting 69 Bravery, 62 Attack, and decreases HP by 288. It may only be equipped by characters level 90 or above.

One of the twelve shining arms. A hammer named for the god who commands lightning. From ancient times, many feared thunder and lightning as being the anger of gods. The thunderclap and lightning born from swinging this hammer is similar to the anger of gods with how it will turn those who obstruct its way into ashes. Only those who have shown their might to the Warrior of Bravery and Pride, Tegmine, can wield this hammer.

Thor's Hammer is a Hammer obtained by defeating Tegmine in the Chamber of Arms. It provides 145 ATK and gives access to the ability Thor's Rage.

Mjolnir and Thor's Hammer are hammers that can be equipped by Kamo.

Mjöllnir is a rod that provides 45 P.ATK, 90 Aim, and deals 50% more damage to insects. It can be found in Dimension's Cauldron. 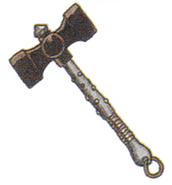 [view · edit · purge]The "Mjölnir" is Thor's hammer in Norse mythology. Thor is commonly known as the god of thunder, and the Mjöllnir was said to be mighty enough to level mountains. Though the weapon is usually known as a hammer, it has also been reported as an axe or club.