The Thirteenth Ark is a floating Ark from Final Fantasy XIII-2. This structure's true reason for existence is not known, but the fragments suggest it would play part in the event known as the 'Day of Reckoning', and home Pulse inhabitants during that time.

The floating fortress is currently deserted, and a number of Academy research teams have been sent inside to investigate. Scientists are primarily interested in the mechanism that allows the Ark to remain afloat without a constant supply of power from the fal'Cie.

The purpose of the facility remains unclear. Some theories posit that the Ark was in operation during the war between Pulse and Cocoon.

This is the prophecy told by Atropos, messenger of the heavens.

The Thirteenth Ark is the fortress that protects the heavenly vault. When the heroes gather unto mighty Pulse to do battle in the war that must be fought, this shall be the stronghold. Know now and remember that the Ark shall be the salvation of all Pulse's children.

When Serah Farron, Mog, and Noel Kreiss resolve the paradox in the Augusta Tower 200 AF by defeating the Proto fal'Cie Adam, a Time Gate for Academia 4XX AF is unlocked. Floating high above the city is the Thirteenth Ark and researchers from the Academy have discovered it floats via a Graviton Core. This discovery results in Hope Estheim and Alyssa Zaidelle's development on the artificial Cocoon with hope of collecting the Graviton Cores needed to levitate it.

In early stages of development, the player was intended to visit the Thirteenth Ark, but the idea was scrapped due to time limitations. Developers had planned to let players discover the area on their own, and it would have been a secret location no one in the world would have had any knowledge of.[1] Symbols on the ground were to help players travel through the maze contained within the Ark.[1] The Thirteenth Ark is a monumental structure that floats in the sky above Gran Pulse. Visually, it was supposed to make the player feel dizzy. Developers planned to make the Ark dungeon-like, and players could explore the mysteries of the location by traversing through a maze.[1]

The dungeon within the Thirteenth Ark contained mechanisms that let the player move from place to place. These machines were intended to allow the player to make huge jumps through the power of wind.[1]

Concept art of an element in the Thirteenth Ark. 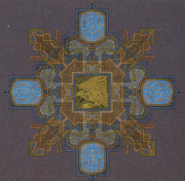 Concept art of an element in the Thirteenth Ark.