Knife that sometimes steals from an enemy.

The Thief Knife (盗賊のナイフ or とうぞくのナイフ, Tōzoku no Naifu?), also known as Thief's Knife and Ruffian's Knife, is a recurring knife in the series. It is usually a mid-ranked knife that grants a random steal from the target while attacking in a way similar to the ability Mug.

Sometimes allows the wielder to steal while attacking. Can be used with Spellblade.

The Thief Knife is a mid to high-ranked knife, usable by all jobs except for the Monk and White Mage. It gives 63 Attack, 66 Accuracy, and has the additional bonus of +1 Speed and a 50% chance to use Mug on the target. It is found hidden in the Phantom Village, inside the Pub, in the barrels behind the counter.

On the Mobile/Steam version, wielding the Thief Knife in a character's left hand will cause the right-hand weapon to attack twice when Mug triggers, as well as the usual left hand attack, allowing the character to attack three times.

The Thief's Knife is a low to mid-ranked dagger equipped by Locke and Shadow. It has an attack power of 88, +3 Speed, +10% Evasion and Magic Evasion, and has a random chance of using Mug on the target. It can be found in Narshe, stolen from Veil Dancer, or dropped from Dadaluma. It can also be used two-handed and with the ability Runic, even if neither Locke nor Shadow has it.

The Thief's Knife is a dagger that can be equipped by Thieves at level 70. It has a damage of 28, and a delay of 194. It boosts the effectiveness of the Thief's Treasure Hunter ability, making it an invaluable asset for thieves looking for items. It is dropped by Sozu Rogberry, a Tonberry Notorious Monster in the Temple of Uggalepih.

The Ruffian's Knife is a mid to high-ranked knife that provides 58 Attack, 20 Hit Rate, +2 Speed, and can cause the enemy to drop an item.

The Thief Knife is one of Locke's alternate weapons, and comes included with the Locke Cole Starter Pack DLC from the PlayStation store. Like all other characters' weapons, equipping it offers no advantages or disadvantages.

Though normally criminal behavior, stealing from monsters is indeed permissible.

Thief's Knife grants +3 to Attack. It can be equipped by Thief, Dancer, Locke, and Rinoa.

A dagger that imparts skill to a thief's hand, making it easier to steal things.

A dagger lacking a guard from a faraway world. It is known as a weapon beloved by thieves for the boost in mobility it grants after being equipped. It can be found in a faraway world's mining town, Narshe.

Thief's Knife (FFVI) is a dagger that provides 88 ATK, 5% physical evasion, and 5% magical evasion. It is obtained during the Final Fantasy VI event, Narshe.

The knife favored by a legendary thief that terrorized the people of the Harena region. It was lost after being stolen by another thief who was wearing thief gloves. [Effect when used: Mug]

In Bravely Default, Thief's Knife is a dagger that provides 12 P.ATK, 95 Aim, 3 Critical, and casts Mug when used as an item. It can be found in the Harena Ruins B2 (hidden) or stolen from The Jackel; since the Jackel himself holds the Thief asterisk, the party can only steal it from him by using the one from the ruins in Chapter 2, or by encountering him again in later chapters.

In Bravely Second: End Layer, Thief's Knife is a dagger that provides 13 P.ATK, 95 Aim, 3 Critical, and deals 50% more damage to beasts. It can be found in the Harena Ruins. 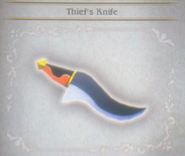 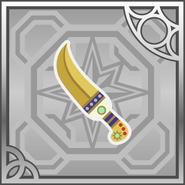 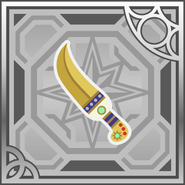