To steal a heart is going too far.

Thief (シーフ, Shīfu?), sometimes abbreviated as THF, is a job class in the Final Fantasy series featured in several installments. It is one of the first jobs to appear in the series.

Most Thieves wield daggers, but some equip short swords or boomerangs. Their armor options are limited to lightweight pieces. Thieves have high speed, accuracy, evasion and critical hit rates with balanced physical stats, including decent strength, HP and defenses. Their most prominent ability is to steal items from their opponents. Many variations of this ability exist. With additional training, Steal can be upgraded to Mug, which steals items and inflicts damage.

Other Thief abilities include "Flee", which allows a free escape from a battle, and "Alert", which prevents back attacks and sometimes pincer attacks. In later installments, Thieves can steal gil from opponents as well as items. In some games, the Thief can be upgraded into a Ninja.

As one of the default classes, the Thief can be very useful due to its speed. Later on, the player can upgrade this class into a Ninja.

The Thief job is gained from the Fire Crystal in the NES version, and from the Wind Crystal in the 3D version. During battle, Thieves can steal items from the enemy or assist the party in escaping from combat. They cannot guard. While on the field, placing a Thief at the front of the party will allow one to open locked doors without using Magic Keys.

The Thief class is obtained from a shard of the shattered Wind Crystal. Its Steal command is invaluable, and also has many abilities that aid on the field map.

Locke Cole is a Thief able to use swords and heavy equipment. A running joke is that he hates being called a thief, preferring the term "treasure hunter".

Yuffie Kisaragi is a Ninja, but is also considered a Thief by trade. She steals the party's Materia, forcing the player to track her down to get it back.

The primary protagonist Zidane is a Thief and a member of Tantalus Theater Troupe, a secretive band of thieves. The Tantalus members Blank, Marcus, and Cinna are temporarily playable thieves who also have the Steal command. Zidane wields thief swords and daggers and learns passive abilities to boost his Steal ability. His Thievery deals more damage the more successful steals the player has performed.

In the International and HD Remaster versions, Thief grants Mug to fiend-type creatures who possess the Attack command in their default command menu.

The Thief (THF) is one of the six basic jobs. They possess the typical Thief abilities of stealing, attacking quickly and dodging attacks.

The Thief job is easily unlocked, and is the second-fastest, behind the Ninja. They have moderate HP and strength, but high Evasion. Thieves wield knives and wear light armor, and can steal equipment, EXP, and gil from enemies, as well as charm them. The ability to charm enemies makes female thieves particularly lethal, because the majority of enemies in the game are male.

The Thief (THF) job is available to humes and moogles as a basic job. Thief is one of the most useful jobs because of its ability to steal any piece of equipment, or even JP and abilities. To take full advantage of this players can examine every piece of equipment the opponents have before engaging.

Thief is a job available to humes and moogles that allows the user to steal various loot from enemies, including gil and accessories, using various abilities learned from knives.

Main article: Thief (My Life as a King)

The Thief cannot Steal, but has the Mug ability and otherwise has the main attributes of a Thief.

The Thief uses the same artwork as Tactics A2. If a Thief gets close to a foe when it is defeated, the party will earn extra gil, depending on the Thief's level. In the PS3/XBOX 360 versions, the "Good Samaritan" achievement/trophy requires clearing a map without hiring a Thief.

Thief is one of the starting jobs.

In the Duel Colosseum, the Thief job card boosts the chance of Treasure cards appearing in the selection area.

The Thief job card appears in the new Labyrinth mode, and increases the frequency of treasure cards while in effect.

Thief is also a job selected for a character in the player's party for Quick Battle, Friend Cards, or wireless matches. It grants the user +50% to their EX Gauge and Assist Gauge at the start of a fight.

Thief is unlocked along with Time Mage. It boasts high accuracy, mobility, and evasion, but otherwise has balanced stats. It is the only job proficient in Dagger Skills, and is therefore most effective when equipped with daggers. Thief also has the Standard Ability of Cleareyes, which gives a higher chance of finding rare items on the field.

Great speed is good not only for dispatching foes, but also for stealing the hearts of the ladies.

Thief is a character available to the party who uses the Back Attack ability during battle. It unlocks at level 10.

A master cutpurse who beguiles enemies with his uncanny quickness. There is no job with greater speed, allowing the thief to act before others in battle.

Thief is a playable character recruited as the First Time Reward for completing Castle Exdeath, Part 4 on Classic difficulty in the FF V realm of the Core Dungeons.

Thieves from the series appear on Triple Triad cards in the version available via Final Fantasy Portal App.

Thieves appear as enemies and defeating them sometimes let them drop a "Thief Key", which is used to open some special treasure chests scattered throughout the dungeons.

Thief is an optional job and one of the more difficult ones. Merchant Hero X guards the memories needed to use it. When taken, Merchant Hero X summons Dungeon Hero X to defeat Chocobo and reclaim the memories. Dungeon Hero X is a difficult foe who will block the stairs if Chocobo gets near them, ensuring that he must either be defeated or afflicted with a status condition to reach the stairs and escape.

Rogue (双剣士, Sōkenshi?, lit. Dual Fencer) is Discipline of War that appears in Final Fantasy XIV. Once known as Thieves, the Rogues developed a unique style of combat revolving around dual wielding knives and daggers. Adhering to no laws but their own, they steal from the wicked to help the downtrodden and maintain order in Limsa Lominsa. The Rogue can later be upgraded into the Ninja job.

Bandit (盗賊, Touzoku?) is a crown from Final Fantasy: The 4 Heroes of Light that can steal items and is proficient with knives. 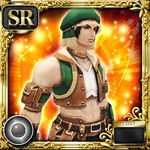 The Thief version from Final Fantasy XI appears as a card in the game.

Thief appears as part of the Crystal Defenders collaboration.

Thief appears on a bronze card.

Bandit is a job with fast attack speed who can lower the enemy status.

As a crossover collaboration with Final Fantasy Airborne Brigade, the Resident Evil smartphone card battle RPG Minna to BIOHAZARD Clan Master boasts character Steven Burnside as a Thief. This is likely in correlation with how Steve was able to sneak around and escape the main confines of the Umbrella Europe facility Rockfort Isle, and the twin golden Orichalcum-esque daggers he wields evoke similarity to his signature weapons of the Gold Lugers.

Thief is a job obtained after defeating the Jackal in Bravely Default and Bravely Second. It is a fast physical melee job that excels in Agility and Dexterity, and uses daggers and bows. The job also appears in Bravely Default: Fairy's Effect.

Tiz and Agnès as Thieves in Bravely Default.

Magnolia as a Thief in Bravely Second: End Layer. 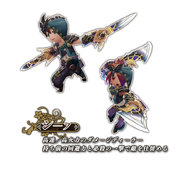 Luneth as a Thief in Final Fantasy III (DS).

Bartz from Final Fantasy V as a Thief. 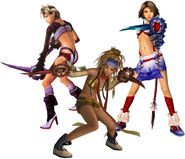 A hume Thief in Final Fantasy Tactics A2: Grimoire of the Rift. 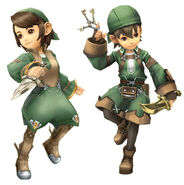 Clavat Thieves from Final Fantasy Crystal Chronicles: My Life as a King.

Selkie Thief in Final Fantasy Crystal Chronicles: My Life as a King.

Brandt as a Bandit in Final Fantasy: The 4 Heroes of Light. 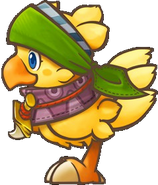