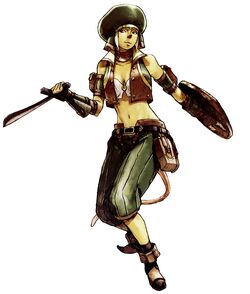 Specializing in covert actions, thieves aim for the perfect opportunity to attack from behind.

Thief is one of six jobs available to all players when they create a character in Final Fantasy XI. Thieves excel at "spike damage" since they get abilities like Sneak Attack and Trick Attack which can be combined with a weapon skill for massive damage while their normal attacks are noticeably quicker but weaker than other damage dealers.

They have a high rating in the use of daggers and can use swords with moderate effectiveness. They also have an A+ rating in evasion and A- rating in parrying on top of a passive evasion bonus to make them difficult targets to hit and make up for their light armor.

Thieves, of course, gain abilities like Gilfinder, Treasure Hunter, Steal, and Mug and special abilities like Hide for stealth. Thieves are also the only job that have the job ability Flee.

Thief is one of the six basic jobs, as such, players can choose to become a thief at any time. If they choose to start the game as a thief, they will be given an onion knife in addition to the adventurer certificate and national ring (if applicable).

For a more in-depth description, see the Thief abilities page 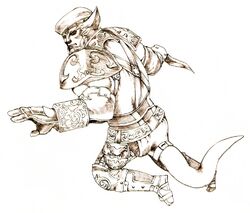 Thieves are uniquely useful, their abilities range from out of combat uses to utilizing their massive speed and agility to gain the upper hand in battle. Their utility with treasure hunter is used to increase the likelihood of getting a rare drop.

Thieves, almost without exception, subjob Ninja from level 33 to the end of the game. Many even pick up the subjob at level 20 when they first get access to Dual Wield. Since thieves have a myriad of ranged attack options, they are often chosen as pullers for the party. Utsusemi will help negate attacks while bringing the enemy back to the party and the Dual Wield characteristic will allow them to build TP quicker.

Prior to level 20, Warrior is often used as a subjob for Thief. This is due mostly to their physical attributes aiding to dealing physical damage. Other than statistical bonuses, the advantages offered by Warrior are relatively few because by the time it starts becoming more advantageous, most Thieves will have moved on to Ninja and for generally good reason.

Thieves have an acceptable hand to hand combat rating. Since Combo, a low level weapon skill can be combined with Sneak Attack, this is one of the highest damage subjobs to use up to level 33. The Monk's high HP as a subjob will also help some of the moderate Thief defense.

Ranger is an uncommon subjob choice, but viable for a couple of different circumstances. The first of which would be for camping creatures with a wide spawn range, where the use of Wide Scan would be useful for tracking down the prey. Perhaps less commonly, some Thieves who take up a ranged capacity will want to use Ranger in order to take advantage of Rapid Shot, Barrage, and Accuracy Bonuses as well as capitalizing on the Ranger's ability to do ranged weapon skills.

For melee-jobs, Dancers are a very reliable subjob, due to the fact they can heal themselves only with the use of TP, which build up after every hit. Thieves, with their fast attacking daggers, and high evasion can store TP in a very fast time. The battles against the monsters will take some more time, because of using the TP to heal, instead of using it for a weapon skill, but it's a very safe way to fight.

The Thief appears with wind-elemental cards.

Thief has a Triple Triad card in the version playable via Final Fantasy Portal App. 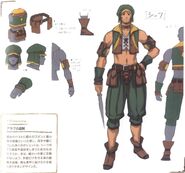 Promotional artwork of the Thief by Yuzuki Ikeda.