Expert bandits who espy secret passages and foil back attacks.

The Thief is a job in Final Fantasy V, obtained after the Wind Crystal shatters. It is among the weakest of the light armor-wearing jobs, possessing low Strength and Stamina, which in turn means low HP. The Thief has the highest Agility, making them vital for empowering the Freelancer and Mime classes. The Thief is one of three classes capable of equipping the powerful Thief's Gloves accessory, which doubles the poor success rate of Steal from 40% to 80%, making them vital for stealing items early on, including one-of-a-kind pieces of equipment only obtainable through stealing.

Mastering the Thief job on all characters in the mobile and Steam versions earns the player the achievement "Band of Thieves".

Thieves have a universal color: green. Each character wears a bandanna or a headscarf. Bartz and Lenna mostly resemble the Thief class from the original Final Fantasy and Final Fantasy III. Faris's costume is the only one that is a different color: yellow instead of green. Galuf's headscarf is tied under his nose, typical of an old-style thief in Japanese culture.

The Steal command steals items from enemies. All of Thief's innate support abilities are useful; Find Passages lets the player locate any hidden passage or invisible walkway, Vigilance prevents back attacks, and Sprint lets the characters run twice as fast in dungeons and towns, but not on the world map (this, however, was changed for the mobile and Steam releases). Mug allows the player to damage the enemy while attempting to Steal from them, but will not activate any special abilities or spells the weapon may have normally.

Artful Dodger gives characters the Thief's base Agility unless otherwise at a higher value. This functions the same as the various other abilities that carry a hidden stat boost, only here that is the only effect it has.

Upon mastery, Freelancers and Mimes gain the Thief's base Agility as well as their base Strength and Stamina unless they already have a higher base from another mastered job. They will also gain Find Passages, Vigilance, and Sprint as innate support abilities.

The job's innate support abilities are Find Passages, Sprint, Vigilance and Artful Dodger, always active when the character is a Thief. The Thief's job command is Steal. Leveling up as a Thief allows the player to gain these abilities for use on the character's other jobs as well.

Bartz as a Thief appears on a Triple Triad card in the version available via Final Fantasy Portal App. 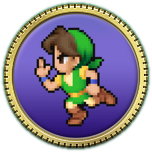