Gameplay consists of icons styled after musical notes must be tapped in rhythm to a song as a cursor moves over the notes, or the notes approach a cursor. If a red note appears the player has to tap the screen; if a green note appears the player must hold the stylus down until the second end of the note passes; and with yellow notes, the player must slide the stylus in the direction of the arrows on them. Failing notes results in the loss of HP, with the stage ending in a Game Over if the party's HP is depleted. Field Music Sequence, Event Music Sequence and Battle Music Sequence stages appear. There is also an Airship Field Music.[2] The field songs correspond to the Final Fantasy games they originate from. If it's an airship level, it will have the airship from that game.[3]

In addition to having over 200 songs and more than 60 characters,[4] Theatrhythm Final Fantasy Curtain Call also includes a versus mode along with the return of "Quest Medley mode", where the player takes on various quests to add new Final Fantasy allies to their group.

The new "Versus Battle Mode" is for rhythmic multiplayer action; the mode will have two players playing the same song and will aim for the higher score. Players can inflict different status effects on one another.

The new Daily Feature track shows a new track every day. Clearing the daily feature track will give x1.5 the average Rhythm Points. One can also acquire more RP by clearing stages without missing notes. The points can be used to add bonuses to selected characters.

The EX Burst Gauge fills by hitting the notes on beat. Once full, the player can select from nine different EX Burst skills that can be used to put the versus opponent in a disadvantageous position. One of the skills is Stoic Judge, where the player rules the opponents' notes as "bad," except for their critical notes. If one runs into a randomly appearing Fat Chocobo it will hook the player up with different treasures. The Museum feature that displayed various records, music, videos, and CollectaCards, which have their own rarity ranks.

During the short, medium, and long quests the player takes on different maps and fights bosses in Quest Medley mode. Players are rewarded for defeating bosses, and completed maps can be shared with other players through StreetPass.

Everything is done in increments. The player must play single player mode songs and earn points to unlock every game mode, as well as options within each mode. The same goes for songs.[3]

Theatrhythm Final Fantasy Curtain Call features over sixty characters from the Final Fantasy series as well as a variety of enemies, including a Behemoth and Magitek Armor. Players start with four characters and form a party from the main heroes from Final Fantasy to Final Fantasy XIV. The rest, including the heroes not chosen, have to be unlocked via playing songs and going on quests.[3] Crystals for characters are earned during playing single songs or quests, and the player gets to choose who gets unlocked and in what order.[3] Additional characters may also be purchased as downloadable content.

The game comes with 221 songs, while the DLC adds another 100 for a total of 321 songs in the game so far. They include songs from the main series, as well as various spin-offs and sequels.[5]

Music from other Square Enix titles, such as Romancing SaGa, also appears as DLC.[7]

Several arrangements of themes from the Final Fantasy series are used as the background themes for the menus:

Below is a list of all 221 songs. Italicized songs are new:

This section about an album in Theatrhythm Final Fantasy Curtain Call is empty or needs to be expanded. You can help the Final Fantasy Wiki by expanding it.

A demo was released on Wednesday, December 18, 2013 after its Nintendo Direct presentation.

A limited edition Nintendo 3DS XL for Theatrhythm Final Fantasy Curtain Call was released alongside the game in April 2014 in Japan.[10] 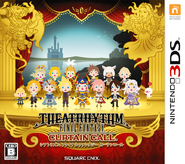 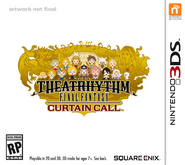 Logo without the art.

Artwork of the cast.