Nintendo 3DS, iOS (retired)
Theatrhythm Final Fantasy is a video game for the Nintendo 3DS and formerly for iOS. It is a "theater rhythm action" game in which players use the stylus to tap and hold notes while fighting enemies. The game features popular Final Fantasy songs and characters, who appear with a similar style to their avatars from Final Fantasy Airborne Brigade, Kingdom Hearts Mobile and Kingdom Hearts Re:coded.

Its sequel, Theatrhythm Final Fantasy Curtain Call, was released in Japan on April 24, 2014 on the 3DS, with a release date of "2014" for other countries. The game features a playlist of over 200 songs, including tracks from Final Fantasy XIV and Lightning Returns: Final Fantasy XIII, with 60 characters and a "Versus Battle Mode" for rhythmic multiplayer action.[1]

Service for the iOS version ended September 30, 2017 (JST). Due to a lack of support coupled with relative unpopularity, the game was removed entirely from the App Store as of this date. While it is no longer possible to download the game or access new content, existing game data will remain on the device for which it was acquired. Because the iOS app had never been updated within its lifetime, compatibility is limited to devices running iOS 4.x-10.3.x.

The game features three kinds of notes. If a red note appears on screen the player has to tap it; if a green note appears the player must hold the note (green notes in field sequences have a pattern the player must trace); and with yellow notes, the player must slide in the direction of the arrows on them. Failing notes damages HP. At some point in the song there will be a section called the Feature Zone where the notes turn silver. Doing well enough in this section activates an event depending on what type of stage is being played.

This gameplay is divided in three types: Battle, Field and Event:

Characters have four stats: Strength, Magic, Agility, and Luck. Each character has different stats to represent their skill, and stats increase as the character levels up. Stats are ranked based on their current level, with the ranks ascending from F to A, with S as the second highest rank a character's stat can achieve and "Mastered" being the highest. In the iOS version, the "Mastered" rank is changed to SS and SSS, being the second and first best rank respectively.

Each character may have up to either three or four abilities divided into either Reactive or Proactive abilities, such as Focus and Strength Up, respectively. Depending on the character, certain skill slots may be restricted to only active or only passive abilities, with some slots able to equip either type of ability. The iOS version has each character restricted to two abilities each, with each ability changing as they level up. This is the only way for each character to have changes to their fixed stat.

When the game starts there will be three main options to choose from—Music Play, StreetPass Settings, and Museum: Music Play branches out into its own categories such as Series Mode, Challenge and Chaos Shrine.

In the StreetPass settings the player can edit their ProfiCard and view others' ProfiCards they have obtained from StreetPass:

The story focuses on a conflict between Chaos and Cosmos. The space between the two is called "Rhythm", and houses a Crystal that births music. When the forces of Chaos disrupt the balance, the Crystal's power wavers and Cosmos sends her warriors to increase a music wave called "Rhythmia" to restore balance and make the Crystal shine again.

The logo mirrors Dissidia Final Fantasy, featuring matching chibi-esque Cosmos and Chaos. The protagonists who were represented in Dissidia 012 Final Fantasy appear along with sub-characters that can be unlocked after collecting crystals. Many enemies from titles of the series appear, such as Behemoth, Bomb, Ultros, Flan, Green Dragon, Magic Pot, Gilgamesh and Enkidu, and Iron Giant.

Characters in bold are available by default.

The game includes over 70 songs. There are at least five tracks for each Final Fantasy from the original to Final Fantasy XIII, corresponding to a field, battle, event, opening and ending theme from each game. There are extra themes unlocked with Rhythmia points that can be played in special modes; and paid downloadable content. The game borrows themes from past games for menus.

All playable songs but "Mount Gulg" and "Chaos Shrine" are present in their original versions.

Several arrangements of themes from the Final Fantasy series are used as the background themes for the menus:

The "Victory Fanfare" from Final Fantasy V is included as a tutorial theme.

Square Enix released 52 songs as downloadable content, with eight songs available at release, at ¥150 per song in Japan, $0.99 in North America, €1.00 in Europe, £0.90 in the United Kingdom, $11.99 pesos in Mexico, and $1.50 in Australia. To commemorate the game's release the eight initial downloadable songs cost ¥100 each for a limited time after the release date. The DLC list includes songs the staff had wanted to include but couldn't fit due to capacity limitations.[3] Theatrhythm Final Fantasy is the first 3DS game to have paid download content.

Theatrhythm Final Fantasy is Ichiro Hazama's debut game. Previously he had worked as support staff with Final Fantasy VII: Advent Children, and proposed making Theatrhythm after Advent Children had been completed.[4] Theatrhythm Final Fantasy was envisioned as a Nintendo DS game, but the development team would have had trouble fitting all content in the game. When Hazama first saw the Nintendo 3DS, he went to developer Indies Zero to finalize the plan for the game and showed this to Tetsuya Nomura receiving the go-ahead to start the project that same day.[4]

Ichiro Hazama has noted the stories and key moments in the Final Fantasy franchise were often tied to his memories of the music, so it was a natural pairing for him to create a rhythm game. To make the game accessible to as many fans as possible, he wanted to add RPG elements as to not turn them off to the title based on it being a rhythm game.[6]

From the beginning the team was discussing how to present characters from the entire Final Fantasy franchise, but after seeing the designs of the Final Fantasy guest characters in Kingdom Hearts Mobile this style was decided to be used for Theatrhythm Final Fantasy. Tetsuya Nomura, who worked as the creative director, thought it would be a good idea to use the artwork from Dissidia Final Fantasy and thus the game's logo features Chaos and Cosmos.[5]

Two demos for Theatrhythm Final Fantasy have been released before the game.

During the Penny Arcade Expo East which was held in Boston, MA, between April 6–8, 2012, a sample of Theatrhythm Final Fantasy was playable at Boston Convention and Exhibit Center.[8]

As part of its promotion for the game's release, Square Enix released a game called Social Rhythm whose gameplay system was similar to that of Theatrhythm Final Fantasy. In Social Rhythm the player could link his or her Facebook or Twitter account to create a character and team up with other players to fight monsters and eventually reach the final boss, Yama-chan (head is attached to a Tonberry's body) from real life Japanese comedy duo Nankai Candies.

The game was accessible here and was only available from February 10 to March 30, 2012.

The staff credits roll after Chaos is defeated, and after that will be available in the Settings to rewatch. 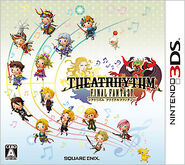 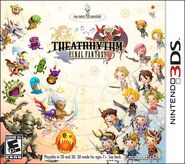 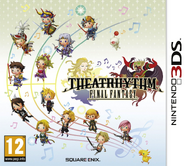