The Thousand Maws of Toto-Rak

The Thousand Maws of Toto-Rak

Into the Beast's Maw

The Thousand Maws of Toto-Rak is the fourth main storyline

Dungeon in Final Fantasy XIV: A Realm Reborn. It can be found in the South Shroud region of Gridania.

Named after a man-eating creature from Padjali folklore, the Thousand Maws of Toto-Rak was built on the site of a natural cave system beneath Silent Arbor. Until recently, it held all of Gridania's foulest criminals, from arsonists to poachers, but the completion of a new gaol closer to the city heralded its abandonment.

Toto-Rak served to contain Gridanian criminals until its eventual abandonment by order of the Elder Seedseer. Whether or not this gaol originated in the time of Gelmorra, it is clearly built using the same subterranean architectural methods, particularly the stone masonry that is practically absent in wood structures of Gridania.

As the Aetheric levels were far too high before the Calamity, adventurers were only permitted to enter for no longer than 30 minutes. There are notes written on the walls detailing the demise of an investigation team and the gradual derangement of their leader, though most of them are now lost in the caved in portions. Before the Calamity the Garlean Empire set up devices that block off certain tunnels with force fields, each operated by four Magitek "photocells", which have been scattered throughout the dungeon and are essential to reach the three Diremite bosses.

Adventurers often came here for the rewards for slaying one of three Diremite bosses, as the rare equipment can be redeemed for Grand Company seals. Now it is a necessary part of the story.

Though some of the tunnels have caved in, its layout is largely retained between both versions of the game. The similarity is so strong, in fact, that the development team even included empty chests in places that once contained loot chests. However, added mechanics like sticky slime on the floors, diremite web traps, and explosive poison pods make it an early example of the much more dynamic dungeons the new game is capable of.

The boss Antares returned as an optional mini-boss, exactly where he was in 1.0, but was removed during development to keep with the consistent 3-boss model of most dungeons. Shaula, originally the hardest boss, never reappeared, and now Graffias is the sole diremite boss remaining, acting as the dungeon's end boss.

The Thousand Maws of Toto-Rak, Part 1[]

The Thousand Maws of Toto-Rak, Part 2[]

"A Thousand Screams" is the dungeon's opening theme. 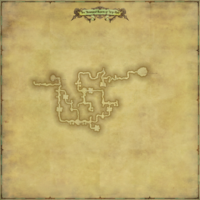 The Thousand Maws of Toto-Rak is among the few dungeons in A Realm Reborn to be imported from Version 1.0, along with Cutter's Cry, Dzemael Darkhold, and Aurum Vale. Notably, all four dungeons would not go on to receive Hard versions. According to Naoki Yoshida in the Letter from the Producer LIVE XIX, it would have required significantly more resources to create them compared to other Hard dungeons.[1]

Toto-Rak received a redesign in patch 6.1. Among the changes were a visual overhaul, a streamlining of its layout, and the removal of the

Leaden-inflicting pools in the latter portions of the dungeon.

Shaula, one of three identical bosses in version 1.0.