Relm: I couldn't miss the chance to practice my drawing!
This article is in need of a few pictures. Perhaps you can help by uploading a picture of the Phantoms' Feast.

Fire in the Gloom

A Feast to Remember

The Tam-Tara Deepcroft is a location in Final Fantasy XIV. It is ancient crypt built into a massive cavern in the central Shroud.

The Tam-Tara Deepcroft was once a settlement and crypt of the subterranean civilization of Gelmorra. Gelmorran nobility were often interred in Tam-Tara, including members of the noble houses Inik and Mena,[1] and even their King Galvanth the Dominator. Following the decline of Gelmorra as its peoples migrated above ground and founded Gridania, the Gridanians continued to bury their dead in the Deepcroft.[2]

This section about a location is empty or needs to be expanded. You can help the Final Fantasy Wiki by expanding it.

Following the Seventh Umbral Calamity, the Deepcroft was overrun by the Lambs of Dalamud, a doomsday cult that worshipped the fallen moon Dalamud. The Lambs regularly summoned voidsent to exact their vengeance for the destruction of their god, an act that requires bodies for the demons to possess[3] in which the Deepcroft was plentiful. Not even the corpse of King Galvanth was spared—in life, Galvanth was a mighty ruler and peerless lancer, traits that made his body an ideal vessel for a powerful voidsent soulflayer.[3]

Wary of the threat posed by the cultists but with his forces stretched thin following the Calamity, Bowlord Lewin Hunte of the Gods' Quiver put out word to recruit adventurers to purge the Deepcroft. One such party was that of Edda Pureheart, Avere Bravearm, Liavinne Painefort, and Paiyo Reiyo. Their foray into the Deepcroft met with a tragic end as the reckless Avere was separated from the party and decapitated, forcing the rest of the group to withdraw. They disbanded in the aftermath, with Edda keeping her lover Avere's head as a grisly keepsake.[2] More successful would be the adventurer that would later become known as the Warrior of Light, who successfully routed the cultists and deposed the voidsent Galvanth. Galvanth's corpse would then be purified by the Padjal E-Una-Kotor, returning the Gelmorran king to eternal rest once more.[3]. Edda would speak with the Warrior shortly afterwards, telling them of how Avere had idolized them as the "adventurer's adventurer".[4]

Driven mad with grief following Avere's death, Edda would later return to Tam-Tara, engaging in necromancy in a attempt to return her lover to life. Paiyo Reiyo would receive a letter from Edda inviting him to her and Avere's wedding at the Deepcroft, alarming the thaumaturge. Coming across the Warrior of Light, Paiyo Reiyo asked their assistance in meeting with Liavinne, who had joined the Scions of the Seventh Dawn alongside the Warrior and per Edda's letter had also been invited, only to learn that Liavinne had been dead some time following the imperial raid on the Waking Sands. Seeking out Liavinne's grave at the Church of Saint Adama Landama, the pair discovered it defiled and Liavinne's corpse missing.[5]

Seeking to return Edda to her senses, Paiyo Reiyo and the Warrior of Light returned to the Deepcroft to attend her deranged "wedding", with Paiyo arriving ahead of the Warrior.[5] Venturing into the crypt, the Warrior found it to be crawling voidsent and the discarded remains of Edda's attempts at necromancy. Among these were the risen Liavinne, whom the Warrior laid to rest once more before rescuing Paiyo Reiyo. Throughout the Deepcroft they would find notes from Edda's journal, detailing her descent into madness as she spoke to Avere's severed head. The journal detailed her plan to make a strong soul for Avere by luring a multitude of weaker souls with her "wedding invitations". They also mentioned her and Avere's admiration for the Warrior of Light and her disdain for the "ordinary corpses" left by "ordinary adventurers".[6]

When the Warrior finally found Edda on the central platform of the Deepcroft, they discovered that she had turned Avere's head into a winged monster not unlike the chimerical naga created by ancient Allag. Upon learning that the Warrior was there, Edda remarked that Avere's "dream of becoming like [them] can come true"—combined with her earlier notes implying that she intended to use the Warrior's body as Avere's new host. The Warrior would defeat the monstrous Avere as the mad Edda fell from the platform to her death,[6] only for her body to be claimed by the necromancer Nybeth Obdilord and born away to the Palace of the Dead.[7]

Every year Eorzea celebrates All Saints' Wake, a holiday during which the saints are said to be invited into the halls of the Twelve to partake in a grand feast, at the cost of depriving the realm of their protection. Taking advantage of this vulnerability, voidsent appear every year under the guise of mortal entertainers, seeking to bring about the mythical Night of Devilry in which an army of fiends descend upon the realm led by the ogre pumpkinhead, only to be foiled each time. Whilst normally these plots would be carried out by the Continental Circus, one year the Circus was absent and in their place was appeared "the Scarlet Snout", a nightmarish clown also known by the name Papa Gruff.[8]

Under the guise of an invitation to a grand banquet, Gruff would abduct unsuspecting citizens to his realm, the Phantoms' Feast, which appeared to be an spectral version of the Tam-Tara Deepcroft, there to be separated from their souls. Investigating the abductions on behalf of the Adventurers' Guild, the Warrior of Light would venture into the Feast and free the trapped souls from Gruff and his family, thwarting the Night of Devilry once more.[9]

The Tam-Tara Deepcroft is built into the walls of a gargantuan, naturally occurring cavern. There is an opening in the ceiling of the cavern, through which the roots of a large tree called the Caretaker[note 1] descend into the cavity while letting in some small amount of sunlight. Many sections of the Deepcroft are similarly overgrown with tree roots from the Black Shroud above.

Altars. On each Altar could be found a cultist orb belonging to the Lambs of Dalamud. When the Warrior of Light disable the orbs, the stone bridge

at the Wormwood Altar activated and rose into position, connecting the altar to a central platform called Eternal Calm. The sphere then descended to Eternal Calm, revealing the corrupted form of King Galvanth. When Edda returned to the Deepcroft, she reused Eternal Calm and the orbs for similar purposes in "reviving" Avere, surrounding the platform with candles and bloody inscriptions for her depraved "wedding".

Branching out from the main cavern were interconnected tunnels divided into descending "rings".[note 2] The entrance to the Deepcroft from Bentbranch was located in the First Ring, while the Second Ring contained the tombs of Gelmorran nobility, such as the Ak-Inik

Tombs, as well as the Tomb of King Galvanth the Dominator

. Also found in the rings were an interring chamber

Some of the tunnels on the lower levels were expanded some time between the Lambs of Dalamud being driven from the Deepcroft and Edda's return. The changes were most obvious in the enlarged interring chamber

and the Tomb of King Galvanth the Dominator, which was relocated to a platform in another large cavern nearby.

Papa Gruff's spectral realm, the Phantoms' Feast, appears to be an alternate version of Tam-Tara. The lower sepulchres appear as Tam-Tara pre-redesign, with the interring chamber unchanged and Galvanth's tomb in its original location. However, passing through aetherial flows found in the crypts would transport adventurers to the cairn's hollow, which contained the redesigned interring chamber and Tomb of King Galvanth the Dominator. Despite this, all of the Deepcroft's locations were given new monikers by Gruff's family—in the cairn's hollow, King Galvanth's tomb became Little Gruff's playroom and the interring chamber Mama Gruff's banquet hall. In the lower sepulchres, Papa Gruff claimed Eternal Calm as his ballroom.

Fire in the Gloom.

The Tam-Tara Deepcroft (Hard) was later released in patch 2.3 as an optional dungeon in the quest

Under the Armor takes places at the Deepcroft's entrance in the central Shroud, just outside the duty entrance.

The Phantoms' Feast took place in a spectral version of Tam-Tara. It could be unlocked by the quest

A Feast to Remember in the Endwalker expansion as part of the 2022 All Saints' Wake event.

The Tam-Tara Deepcroft also appeared as an open world dungeon in the original release. While it contained many of the same landmarks, such as the Tomb of King Galvanth the Dominator, it underwent a complete redesign in A Realm Reborn, as the small central chamber was expanded into a massive cavern. 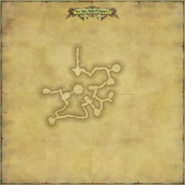 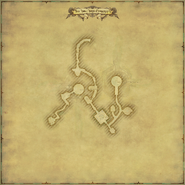 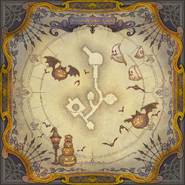 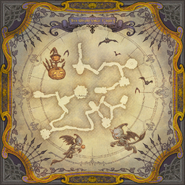 The Tam-Tara Deepcroft (Hard) the theme is instead changed to an extended version called "Dark Vows". "Dark Vows" can be obtained as an orchestrion roll by repairing the

Faded Copy of Dark Vows, which can be obtained from both duties.

The Tam-Tara Deepcroft (Classic) can be unlocked upon completing the Sastasha Seagrot (Classic). It sees players battle through the Greenwood Altar, Wormwood Altar, and Eternal Calm to face off against a record of Galvanth the Dominator. Completing the dungeon unlocks its Elite version.

The Tam-Tara Deepcroft was the only dungeon available in the closed alpha test for A Realm Reborn. This version of Tam-Tara was greatly expanded, with several additional passages giving it a maze-like layout. All of the altars had sealed barriers like the one found on the Wormwood Altar that needed to be dispelled with cultist rosaries. The additional rosaries could be found in the unmarked tomb next to the Greenwood Altar and in an unnamed room in the passage behind the interring chamber. The Tomb of King of Galvanth the Dominator was located beyond the collapsed stairs next to its current location, and could only be accessed through the interring chamber passage. Players could then take a shortcut back to the interring chamber by sliding down the collapsed stairs.

The Dalamud priests and Octavel the Unforgiving were Miqo'te lancers during the alpha and did not spawn void soulcounters upon their defeat. Instead an additional boss, the dullahan Bockman, could be found in the Tomb of King Galvanth the Dominator.

The additional passages in the alpha Tam-Tara still exist in Tam-Tara's map, but have been made inaccessible by collapsed debris or locked doors. Bockman is no longer present in the duty, instead being the boss of the guildhest Under the Armor, which takes place in the Deepcroft's entrance in the central Shroud, referencing Bockman's original location. The passages behind the interring chamber leading to the Tomb of King Galvanth the Dominator were later reimagined in the Tam-Tara Deepcroft (Hard), with Galvanth's tomb once again containing a dullahan boss, the Spare Body.