The Rursan Arbiter is a cinematic fight and the final boss in Final Fantasy Type-0. It is the transformed form of Cid Aulstyne by the unseen Rursus Crystal. The Arbiter's helmet has a vertical glowing eye, much like the depiction of Etro's gate in-game. The Rursan Arbiter is also known as the "Judge". His job is to deem whether an Agito has been born into Orience, and if none prove themselves by passing his crucibles, to commence the end of the world. The Japanese name makes it clearer that the Judge's role is to specifically judge the l'Cie the Crystals of Orience have sent to Pandæmonium as their champions.

The Arbiter also appears in the Type-0 novel, Final Fantasy Type-0: Change the World -The Penultimate Truth-, but takes on a different form, as the novel depicts the events of the preceding spiral.

Blessed—or cursed, perhaps—with the power of the Rursus, Cid awakens as adjudicator of all in the depths of Pandæmonium.

Much like his formidable, supple-bodied creators, Cid wields his Rursan weapon with great finesse. He also exercises his newly acquired authority as Arbiter by delivering retribution upon all those who oppose him. With a single touch, Cid can extract his opponent's phantoma, inflicting instant death.

However, despite his demigod status, Cid is not invincible. By harvesting the twelve phantoma housed within his core, one can turn the tables and pass Final Judgment upon the Arbiter himself.

For the first phase, the player cannot seriously harm the Arbiter, and must fight until it kills all their party members.

"Vermilion Fire" plays during the final battle against the Rursan Arbiter.

The Rursan Arbiter appears as a boss in the Series Boss Battles since the release of the Escaping the Imperial Capital Mission (available only in the japanese version).

Alternate view of the Arbiter (PSP). 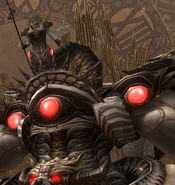 [view · edit · purge]Rursus is of Latin origin and has many meanings. The most popular are "again", "anew", "backwards", or "on the contrary".

The Arbiter's role in destroying the world if there is no savior may be akin to the Last Judgment, part of the eschatological world view of the Abrahamic religions and in the Frashokereti of Zoroastrianism. In Christian theology, it is the final and eternal judgment by God of the people in every nation resulting in the glorification of some and the punishment of others.