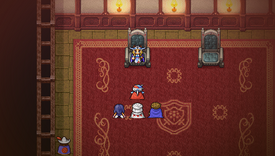 "The Rebel Army" (反乱軍のテーマ, Hanrangun no Tēma?, lit. Rebel Army Theme), also known as "Rebel Army Theme", is an iconic theme from Final Fantasy II. It was composed by Nobuo Uematsu. It is a counterpart to the "The Imperial Army": where this theme is the leitmotif of the protagonists' party, the other is the motif for the antagonists.

"The Rebel Army" is used as the background theme for the base of the Wild Rose Rebellion at Altair. It is the twenty-sixth track of the All Sounds of Final Fantasy I & II album.

"The Rebel Army" was remastered for the Wonderswan Color release by Tsuyoshi Sekito, and this version has been used in every subsequent release. It is the eighth track of the original soundtrack.

The original version appears in the music player. It is the second track of Memories of FFII purchased from Longwythe Rest Area for 100 gil.

The original NES version of "The Rebel Army" is a bonus track, purchasable by 500 PP at the PP Catalog after completing Shade Impulse.

After being acquired, this theme can be selected by default for battles including Firion or the Emperor, or any battle with Pandaemonium as the arena.

The Dissidia arrangement appears and can be bought for 150 PP from the PP Catalog, and is available from the start.

It is used for battles including Firion or the Emperor, or any battle with Pandaemonium as the arena.

A new rock/metal arrangement and the original from Final Fantasy II appear. The new arrangement is a default theme, while the original NES version can be bought from the shop for 3,600 gil.

In the iOS version, it is a purchasable Battle Music Sequence song, with Altair appearing as the background.

The theme appears on the Theatrhythm Final Fantasy Compilation Album.

"The Rebel Army" is a Battle Music Sequence. It is included on the Best of Theatrhythm Final Fantasy Curtain Call album.

"The Rebel Army" is a BMS song that is available to the player by default.

Firion's Champion Jewel. The player may also select this theme as the background music for battles from the Config section of the main menu, labeled as "Champion Theme: Firion".

"The Rebel Army" concluded the Symphonic Suite Final Fantasy, performed by the Tokyo Symphony Orchestra and conducted by Katsuhisa Hattori on the 20th of May of 1994.

A classic guitar arrangement of theme "Rebel Army Theme" is appears. It is the fourth track of the album.

A piano arranged version of the theme appears. It was arranged by Hiroyuki Nakayama and is the seventh track of the album.

The "The Rebel Army" was the final theme played in the Final Fantasy - Final Fantasy III medley, performed by the Tokyo Philharmonic Orchestra at the Tokyo International Forum on February 20th, 2002. The medley is the fifth song of the line-up and the fifth track of the concerts' recording.

An adaptation of 20020220's medley titled "FINAL FANTASY I-III Medley 2010" was included in this concert conducted by Arnie Roth and performed by the Kanagawa Philharmonic Orchestra is present on the third Distant Worlds album. It was originally performed in Tokyo in November 2010.

A live recording of "The Rebel Army" from at the London premiere of the concert of the same name on February 15, 2014, conducted by Arnie Roth, is included on this album.

"SCENE VII" from Symphonic Suite Final Fantasy was included in this album as its fourteenth track.

"Rebel Army Theme" was released as the sixteenth track of this collection of themes present n the Dear Friends -Music from Final Fantasy- concert tour.

"Rebel Army Theme" is included on the first disc of this collector's edition set.