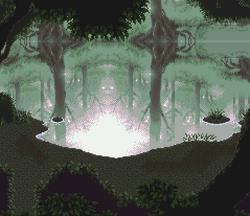 "The Phantom Forest" (迷いの森, Mayoi no Mori?), also known as "The Mystic Forest", is the field theme for the eponymous location in Final Fantasy VI.

The Phantom Forest has its eponymous theme as a background music. It also plays in numerous other dungeons, such as caves. The theme is included on the original soundtracks.

In battle with the primal Tsukuyomi, the motif is referenced at the beginning of the second phase, mixed with the Doma theme.

The Dissidia 012 Final Fantasy arrangement is available on the Memories of Dissidia 012 FF album purchasable from Old Lestallum for 500 gil. The player can listen to it in the music player.

Known as "The Mystic Forest," the theme is included on the piano arrangement album performed by Reiko Nomura.

An arranged version of the theme is included performed by the Milan Symphony Orchestra.

An arranged version of the theme is included.