Cid Pollendina: Oh, shut up and help me remodel the The Immortal Dark Dragon page!
Please expand this article into a full one. The following tasks need to be completed:This request can be discussed on the associated discussion page. Remove this notice upon completion.

In the Maxima version of World of Final Fantasy, The Immortal Dragon serves as a superboss, and can be fought after clearing the game's Postscript. To challenge him, the player must enter a new portal on the first floor of The Crystal Tower to enter a simulacrum of the tower's highest floor. Upon reading the note on the tombstone, the player must fly to certain locations on the map with the airship to activate six elemental Puzzle Switches. Once all six Puzzle Switches are activated, The Immortal Dark Dragon appears in the same room and can then be challenged.

Defeating The Immortal Dark Dragon when playing World of Final Fantasy Maxima on the Xbox One unlocks the "Dark Dragon" achievement.

Age: Immeasurable
(Due to his alternate interpretation of time)

Notes: Lone wolf / Brutish / Hard to have a conversation with / Lives only to destroy

A somewhat rare breed of Exnine Knight, he is absolutely loyal to Ex9-I-1 whose orders are the only ones he ever follows. Otherwise, he moves to rain destruction upon A-Worlds, and becomes a wild card for any other Exnine Knight he encounters on those worlds. For this reason, one Exnine Knight (Ex9-III-2) has schemed to make Ex9-I-7 expend most of his power on one specific world. As a result of this, the Immortal Dark Dragon that has appeared in Grymoire is but a small part of the whole, but he still presents a grave threat if left unchecked.

What? You want to mess with me? 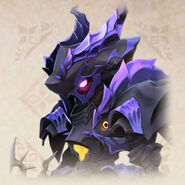