An elite trooper belonging to Shinra's Public Security Division and said to be the most dangerous of all Shinra troopers. He serves as a unit commander in the Sector 8 town area.

The Huntsman is a mini-boss in Final Fantasy VII Remake. He is a Shinra infantry equipped with a blazing red riot shield and a stun baton. His shield repels all frontal physical attacks. He is fought in the end of Chapter 2, "Fateful Encounters", as Cloud alone while he is maneuvering through the chaotic streets of Midgar.

The Huntsman is later fought at the Corneo Colosseum during "Two-Person Team vs. Slum Outlaws".

His shield protects him against frontal attacks. Try using magic or attacking from the rear. Inflicting a certain amount of damage makes him susceptible to staggering.

The Huntsman is accompanied by a Riot Trooper and three Security Officers. The Huntsman cannot be damaged with physical attacks from the front. He holds his shield up most of the battle, but may lower it to attack. The Huntsman only uses melee attacks. All soldiers in this battle are weak to

The other soldiers should be easy to dispatch and thus the player should do that before focusing on the Huntsman. If the opportunity arises to attack him from the behind, the player should take it, but otherwise using

while in Punisher Mode has Cloud retaliate to all physical attacks, another great way to damage the boss. However, only the first hit from Stun Baton will be countered, and so it is better to guard in Operator Mode for that attack or dodge it, or Cloud may get stunned. When the Huntsman reaches for the baton it is best to dodge-roll away from him. It is also best to keep distance to be able to anticipate and guard/counter the Huntsman's Riot Shield attack. After pressuring the Huntsman with fire spells, Cloud can unleash Focused Thrust to stagger him.

The player can equip Cloud for magic damage to augment his fire spells. The

Mythril Saber is a good option and can also provide MP regeneration when upgraded. Pairing

Magnify Materia allows Cloud to attack all soldiers at once. Bringing

First Strike Materia lets the player open with a magnified fire spell. Having

Steadfast Block Materia is also good as the player can then simply guard when out of ATB in either of Cloud's modes. The player can equip

Chakra Materia for healing and preserve all MP for fire spells. However, the player can safely use up all MP here as this is the end of the chapter and MP is recovered in between chapters. As Cloud is alone and needs to heal himself, casting

Regen may also work well. The Huntsman can be fought by using Counterstance, and when he staggers, Infinity's End defeats him.

The Huntsman is a fourth and fifth round opponent at the colosseum match "Two-Person Team vs. Team Payback", a tournament where the player can pick their team. The match is available in Chapter 9, "The Town That Never Sleeps", with Chapter Select and Aerith in party, as well as in Chapter 14, "In Search of Hope".

One character can rush in, after which the player can switch to the other to hit the Huntsman from a distance, and make use of magic to pressure him. The final round is against one Huntsman and four bandits; after killing the bandits the player can focus on the Huntsman. The same tactics as in Chapter 2 apply.

The Huntsman has a backstory that was drafted but not revealed in game. He is the fourth son of a provincial livestock farmer. His natural strength made him a candidate for the elite riot troopers, but he got involved in a bit of trouble that prevented him from taking the exam. His friends both fear and respect his strength and he is always called upon to participate in large-scale operations, his bosses having chosen to take a blind-eye to the customizations he has applied to his equipment. Many rumors about him circulate within Avalanche, but his real name remains a mystery.[1] 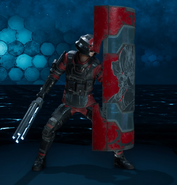