December 2 - December 16, 2016
The Hanging Edge is an event in Final Fantasy Brave Exvius, based on the location of the same name from Final Fantasy XIII.

The citizens of the Hanging Edge, a city on the outskirts of the technologically advanced continent of Cocoon, find themselves the target of a purge, and are now being forced from their homes.

Rain and his crew must now put themselves in the citizens' shoes, and retaliate against their oppressors in an ephemeral utopia ruled by higher beings, masked as a world where joy comes from technological development...

There, the struggle of those bent on changing the world order to escape their inconceivable fates strikes a chord with Rain.

Little does he know that he will soon be witness to the hidden power awaiting at the end of the world.

Trochoid Gear within the event period. Players can obtain Trochoid Gears by defeating enemies inside the event dungeon. Having units original to Final Fantasy XIII on the party will give bonus to the amount of Trochoid Gears earned. Such units are Lightning (+100%), Snow, Vanille, Hope (all three +75%), Sazh and Fang (both +50%). 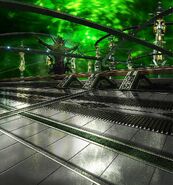